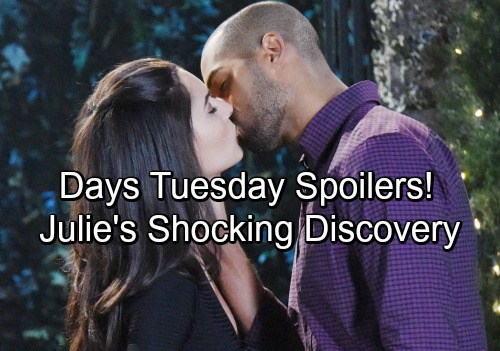 Days of Our Lives (DOOL) spoilers for Tuesday, September 12, tease that Gabi (Camila Banus) will offer Eli (Lamon Archey) a present. He took a calculated risk by shooting Commissioner Raines (Aaron D. Spears), but everything worked out in the end. Gabi will suggest that she had to give Eli a little something to show her gratitude.

It looks like this gift will lead to a close moment between them. Days of Our Lives spoilers state that Julie (Susan Seaforth Hayes) will make a shocking discovery on Tuesday. She’ll stumble across Eli and Gabi in a compromising position.

Julie will probably demand to know what in the world is going on. She thought Eli had finally wised up and moved on, but things have changed since then. Julie should worry about the possibility of Gabi and Eli reuniting. She’ll undoubtedly voice her disapproval again, but Eli will insist on living his own life.

Meanwhile, Hope (Kristian Alfonso) will try to sidestep Rafe’s (Galen Gering) questions. When he pesters her about their upcoming wedding, Hope won’t be interested in nailing down any details. Days spoilers say Rafe will confront Hope about her feelings. He’ll wonder if she might be having second thoughts about their future together.

Other DOOL spoilers reveal that Chad (Billy Flynn) will demand some answers from Andre (Thaao Penghlis). He’ll grill his brother about Hattie (Deidre Hall) and the role he played in sending her down this dangerous path. Andre will give his side of the story before shifting gears. He’ll believe he deserves the chance to run DiMera Enterprises since he’s actually sane.

Naturally, Chad and Kate (Lauren Koslow) will disagree. Days spoilers say Kate will want to stay in control at DiMera, but Chad and Andre will obviously have their own views on what should happen. It sounds like a corporate war could be heating up.

Elsewhere, Brady (Eric Martsolf) will object to Nicole’s (Arianne Zucker) idea of staying at the Horton Center. He just won’t feel comfortable with Nicole and Eric (Greg Vaughan) working together by choice. They’ll clash over Nicole’s motives and the potential outcome of all this.

Nicole will ultimately agree to step away, but Brady will have a change of heart later this week. We’ll give you updates as other Days of Our Lives news comes in. Stick with DOOL and don’t forget to check CDL often for the latest Days of Our Lives spoilers, updates and news.