Days of Our Lives Spoilers: Week of Dec. 4 – Paul Kissed by Will, Dumped by Sonny – Ciara’s Threat Terrifies Claire 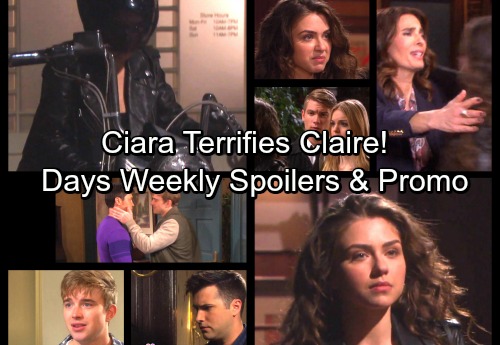 Days of Our Lives (DOOL) spoilers for the week of December 4-8 tease that Ciara (Olivia Rose Keegan) will show off her wild streak. It seems she found her rebellious side while she was away from Salem. Ciara needed some time to clear her head after Theo (Kyler Pettis) and Claire (Olivia Rose Keegan) pulled off secret schemes.

However, Claire was the only one who acted out of selfishness. Ciara’s forgiven Theo, especially since he’s in a coma now. It’s hard to be mad at someone who’s in such bad shape. Unfortunately, Claire won’t be off the hook yet. Days spoilers state that Ciara will get in Claire’s face and announce that she intends to make her pay. 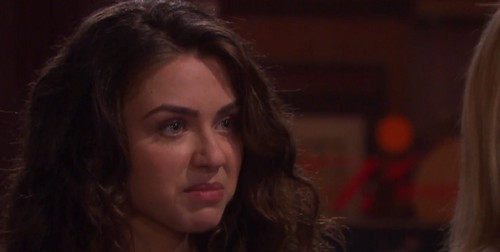 Later this week, Ciara will stop by Theo’s hospital room. When she actually sees the damage firsthand, it’ll probably add to her rage. Ciara may hold Claire responsible for this. She might think Claire should’ve been watching out for Theo. Ciara will certainly feel like she should’ve been around when her bestie needed her.

Other Days of Our Lives spoilers say Paul (Christopher Sean) is in for a shock. He’ll never see Will’s (Chandler Massey) move coming! After Belle (Martha Madison) accidentally fills Will in on his affair, he’ll decide he’s quite interested in Paul. DOOL fans can expect Will to do some flirting and eventually plant a kiss on him.

Paul will enjoy the sexy smooch, but he won’t think it’s right to do this to Sonny (Freddie Smith). Days spoilers state that Sonny will knock on the door as the lip lock ends. Once Will goes on his merry way, Sonny will break Paul’s heart. He’ll insist that he cares about Paul, but he can’t give up on Will.

Days of Our Lives spoilers say Paul won’t exactly be taken aback by the news. He’s been preparing for this moment for a while now. Of course, Will’s apparent desires for Paul could cause some trouble. Sonny won’t be brought in the loop yet, but the kiss revelation is sure to catch him off guard down the road.

It sounds like some exciting episodes are coming up. We’ll give you updates as other DOOL details emerge. Stay tuned to the NBC soap and don’t forget to check CDL often for the latest Days of Our Lives spoilers, updates and news.