Days of Our Lives Spoilers: Week of September 18 Preview Update – Brady Drives Eric Out of Salem 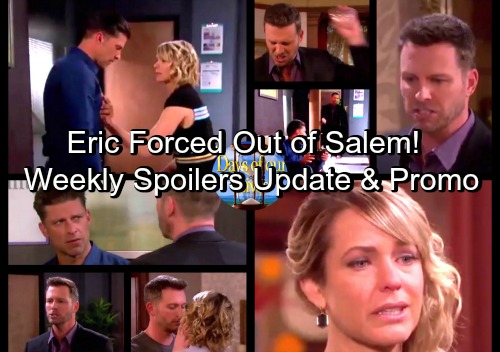 Days of Our Lives (DOOL) spoilers update for the week of September 18 tease that Nicole (Arianne Zucker) will have to be honest with herself. She’s still in love with Eric (Greg Vaughan), but she’s clinging to her life with Brady (Eric Martsolf). Nicole knows that Brady has stuck by her through some rough times. He’s her best friend, but she’s found better beau material.

During an intense encounter with Eric, Nicole will be tempted to kiss him. She’ll manage to resist for now, but the incident will force her to rethink things. Days of Our Lives spoilers state that Nicole will finally admit she has feelings for Eric. Part of her will know that Eric feels the same way, but he hasn’t divulged anything out loud yet. Like Nicole, Eric’s just too afraid of hurting Brady.

Unfortunately, Brady will find out anyway thanks to Chloe (Nadia Bjorlin). There’s a good chance Brady will down a few drinks over this news. He’ll be furious when he realizes he was right about Eric and Nicole’s connection. Brady will march over to Eric’s offer and begin a long tirade. He’ll really let his brother have it!

Brady will get Eric to admit that he’s longing for Nicole. However, Eric will assure Brady that he’s not going to steal her away. Brady just won’t buy that. He’ll be convinced Eric and Nicole are going to have some hot hookups at the office. To prevent cheating, Brady will order Eric to give Nicole the boot at the Horton Center.

DOOL spoilers say Eric will be livid over Brady’s demand. He’ll insist that he’s not going to be the one to deprive Nicole of her dream. Nicole wants to help others and Eric has no intention of standing in her way.

After penning a profound letter to Nicole, Eric will leave Salem behind. He’ll seek a fresh start as he tries to let Nicole move on. Days of Our Lives spoilers reveal that Marlena (Deidre Hall) will be upset when she gets updates. She’ll decide to go after Eric the following week. Marlena will probably hope that she can change her son’s mind.

Days spoilers say Eric will open up to Marlena about his issues. He thought forgiveness was all he craved, but it was obviously more than that. Eric wants Nicole back and that’s why he couldn’t stick around.

Of course, Nicole isn’t going to be pleased by Brady’s actions. Will she lash out and tell Brady she wants Eric instead? Will Nicole track Eric down to confess her love? We’ll keep you posted as other Days details emerge. Stay tuned to DOOL and don’t forget to check CDL often for the latest Days of Our Lives spoilers, updates and news.