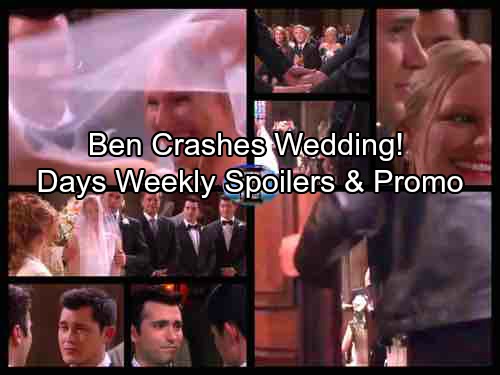 Days of Our Lives (DOOL) spoilers update for the week of September 25 through 29 tease that the double wedding is almost here. Chad (Billy Flynn), Abigail (Marci Miller), Sonny (Freddie Smith) and Paul (Christopher Sean) are all excited about celebrating together. They’re ready to tie the knot next to people they care about.

Of course, there’ll be a few issues to sort out before the ceremony begins. Days of Our Lives spoilers state that Abigail and Chad will try to find Dario (Jordi Vilasuso) this week. They’ll hope he can help with Abigail’s immigration department woes. It turns out Gabi (Camila Banus) will be partially responsible for saving the day.

Once Justin (Wally Kurth) does some legal maneuvering, he’ll announce that the annulment has been granted. Chad and Abigail will be free to get hitched, but we have to get to the bachelor and bachelorette parties first. They’ll say goodbye to single life with several friends and family members.

After Andre’s (Thaao Penghlis) bash gets weird, Chad and Sonny will make up an excuse to leave. Theo (Kyler Pettis) will make his escape as well at they’ll all end up at Paul’s shindig. Days fans can expect some stripper antics at both Abigail and Paul’s parties, but things will calm down sooner or later.

Then, it’ll be time for the main event. DOOL spoilers reveal that everyone will gather at St. Luke’s and the couples will kick off their vows. Abigail will be thrilled about marrying the man of her dreams. There’s no one else who makes her feel as loved and supported as Chad. She’s his whole world and they’re finally getting a chance at happiness.

Likewise, Paul and Sonny will be prepared for their future together. They’ll plan to start the next chapter of their love story, but a patient at Bayview will have other ideas. Ben (Robert Scott Wilson) will manage to overpower the guard and make a quick getaway.

As the bride and grooms say their vows, Ben will crash the wedding and catch everyone off guard. Abigail is sure to be particularly terrified by her crazy ex’s appearance. She just can’t get rid of this guy! Chad will vow to protect Abby, but Paul and Sonny will actually be more affected by Ben’s arrival.

Days of Our Lives viewers will soon learn shocking information about Will (Chandler Massey). Ben knows details that will change everything for “PaulSon.” We’ll give you updates as other Days news comes in. Stay tuned to DOOL and don’t forget to check CDL often for the latest Days of Our Lives spoilers, updates and news.