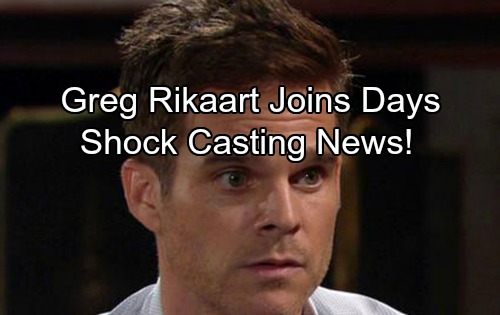 Days of Our Lives spoilers confirm there will be another new face in Salem. Greg Rikaart has been cast in a mystery role. The actor is best-known as Kevin Fisher on The Young and the Restless. With the shock casting news, will he continue to make appearances on Y&R?

Even though head writer Ron Carlivati said no new characters right now, he is already making plans for 2018. Not only are some old faces returning, like Vivian Alamain (Louise Sorel,) there are some new characters being written into the soap. Tyler Christopher will play one, and Greg Rikaart will be another.

The exact date of his debut appearance on DOOL has not been released. A rep for NBC would also not give any Days of Our Lives spoilers regarding who he would play. However, in an unusual move, they did confirm to TV Line he has joined the cast. Normally, the network refuses to comment on such matters.

The Young and the Restless let go of the man who plays Kevin Fisher five months ago. However, he does still occasionally make appearances. It has been revealed that being on DOOL will not prevent the reformed perp from continuing to show up on Y&R.

Even though there are no details about the new character, fans are busy speculating. For so many years, the same people have stayed in Salem. When one romance ends, another begins, but do to the small cast, they go back and forth with the same partners. There needs to be new faces in the town.

There is also the issue of there being no DOOL villain. Stefano DiMera played the part best, but that ended with Joseph Mascolo’s death. Deimos Kiriakis (Vincent Irizarry) was killed off and Andre DiMera (Thaao Penghlis) seems to be turning into a good guy. You can’t have a good soap without a diabolical villain spreading chaos and mayhem.

Days of Our Lives spoilers also tease that Greg Rikaart could be playing a good guy. However, there are enough of those in Salem. To continue juicing up ratings and create gripping storylines, some bad people need to roll into town. The Young and the Restless alum seems perfect for that kind of role.