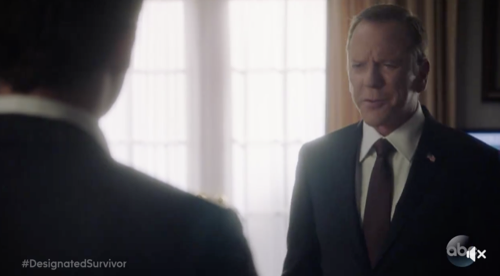 Tonight on ABC their new conspiracy thriller Designated Survivor airs with an all-new Wednesday, October 11, 2017, episode and we have your Designated Survivor recap below. On tonight’s Designated Survivor season 2 episode 3 called “Outbreak,” as per the ABC synopsis, “President Kirkman is faced with a viral pandemic, which could kill countless Americans, while FBI Agent Hannah Wells and M16 Agent Damian Rennett discover evidence that could change the lives of members of the first family forever.”

Emily and Seth are walking the halls talking about alien species visiting the White House. Emily thinks it is a great idea. Meanwhile, Kendra holds a press conference about the resurrection of a statue of a figure who was a slave holder. Reverend Dale stands to speak. The statue is a reminder and should not be moved. The room breaks out in chaos.

Hannah is working with Chuck on Lloyd’s case. Hannah visits the scene of the crime with their London consultant. She looks over the wreckage trying to retrace Lloyd’s steps. What was he looking for? Hannah finds a document. It looks like Lloyd left something behind instead.

Aaron and Emily talk by video with a doctor dealing with a dangerous viral outbreak. She has a possible treatment source. She tells them to widen the quarantine area.

Emily consults with the president about the viral outbreak. The possible solution has not been approved by the FDA. The president wants to move on this. People are dying. They have access to 10k doses. Emily says that that is enough to contain the outbreak.

Hannah meets with the First Lady. Hannah shows her numerous documents that Lloyd touched. The first lady is surprised to see the heart transplant paperwork for her father. She is surprised her mother saved it. Her father was lower down on the donor list, but was bumped up.

Aaron gets a call. The 10k doses of treatment never arrived. Their source, Mr. Macky, sold it to someone else. Emily points out that she is sure he sold it for more money. The White House sends Kendra to intervene in court by forcing Mr. Macky to give over his 10k doses.

Hannah and her team look over the documents. They think they have something.

The president personally checks in on the viral outbreak.

Hannah and her consultant go to check out a location where Lloyd might be or might have been. They enter into the dark warehouse. An explosion occurs. The fire department shows up. The authorities want to know why they are on private property after hours. Hannah refuses to answer. She is working a federal investigation. She tells them to cal the White House.

Seth addresses the media. Seventy-four people have died from the outbreak, but they are doing all they can to aggressively contain it.
The president checks in with Tammy about the outbreak. Tammy needs more medicine. The virus is moving fast. Tammy thinks that Macky has more doses and he is holding back. Emil gets on it.

Lyor can’t stop staring at the frog. Kendra comes in. Lyor tells the frog’s owner that the frog is stupid. Seth interrupts. He needs Kendra to update the room about the statues. She brings Lyor with her, who gets the whole room in an uproar with his opinions and cynical views. They all demand he leave.

Aaron talks with Hannah about her breaking into the warehouse. Hannah doesn’t want to share too much. She is working on something that involves the president’s family. She can’t involve him.
The president meets with the Reverend about the statue. The president had to compromise. He kept the statue up but had to move it to an area with less traffic. Emily interrupts. Macky has arrived.

The president meets him. He is angry at Macky for misleading them all. He wants the rest of the doses. Macky has been making the drug. But he isn’t happy about handing it over. He wants the money he is owed. Releasing this drug now will divulge his recipe and ruin his patent. Because the president ruined Macky’s reputation, he will fix it for the medicine. The president holds a press conference introducing Macky as somewhat of a hero.

Hannah and Chuck find out more about the person who was bumped on the transplant list so that the first lady’s father could get a heart. They leave to find the man.

The president speaks with Tammy. Things are getting better. Not for Tammy though. She is suffering kidney failure after trying to too high dose of the drug. The president wants her to come home right away for treatment. She refuses. Good soldiers stay until the last shot is fired. She signs off.