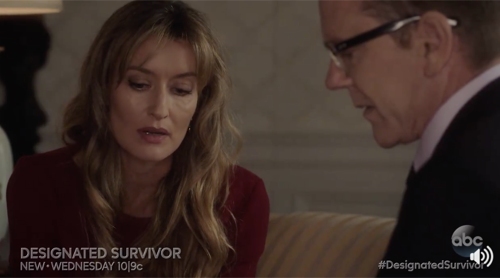 Tonight on ABC their new conspiracy thriller Designated Survivor airs with an all-new Wednesday, October 18, 2017, episode and we have your Designated Survivor recap below. On tonight’s Designated Survivor season 2 episode 4 called “Equilibrium,” as per the ABC synopsis, “Tensions rise between America and Mexico when a Mexican citizen is shot during a border dispute regarding Mexican trade imports. As a result, Kirkman and his staff must work quickly to resolve the situation and create a new trade deal.”

The show opens with Hannah giving an interview about finding a dead body. She denies knowing Eric Little. She tells the detective that these issues are above his pay grade. Hannah meets with John and asking for his advice. She thinks this is the last desperate act of Lloyd. He tells her she has to tell the president. She is impeding an investigation and it could cause her trouble. He tells her to at least tell the president’s counsel what she thinks is going on.

Video footage is shown of truckers blocking a highway during their sixth day of striking. The truckers are angry because they say Mexican truckers are taking their jobs. A truck is then shown crashing into the protestors. The trucker is shot and killed. He is from Mexico and it heightens the tensions. The president is shown discussing the strike with his staff. It has cost the country over $10 billion already. The Ambassador to Mexico is not happy. The president is working on a treaty with Mexico but is not having much luck. US businesses are moving to Mexico to pay fewer wages. A press conference is held but no real answers are given.

Mexico is winning the PR battle and the president is not happy. Paul goes on television to call the president out and says he needs to worry about our county, not globalism. Aaron and Seth discuss the trade deal and both agree they just can’t win. Aaron meets with a senator and she agrees to come out publicly to support the president. Aaron thanks her but gets angry that she sent Nadia to meet with him. He tells her this won’t earn her any points of she does something like that again.

The president decides to call the widow of the trucker who was killed, hoping it will help the trade deal. The president’s wife asks her mom if she accepted a bribe and she says yes. She did break the law to save her husband’s life. She says she would do it again. It gave her husband 15 more years of life. Alex is in shock.

The widow is about to make a statement with the president but he changes his mind because he can tell she is just too upset. He doesn’t want her to make a statement to the press. He just wants her to tell him more about her husband. Her husband had been out of work for several months but just got the truck driving job a month ago. She can’t understand why he did it. The president thinks he has an idea of what happened and asks his staff to investigate.

The president’s counsel comes to talk to Alex and she tells her the FBI is subpoenaing her mother. Alex tells the president that her mom is in trouble. He reassures her it will all be OK. They have been through so much worse together. The president meets with Mr. Arronte and tells him he knows he hired the trucker driver to run into the border blockade to help him in the negotiations. The president tells him he needs to call his president and tell him to take the deal or he is going to make sure he is charged with manslaughter. Mr. Arronte says he will.

Aaron confronts Nadia but she tells him he has forgotten his roots. The president meets with Paul and tells him he needs his backing. Paul says he will give it but it is a bad deal for both countries. The president meets with the man who gave him the car and asks for a favor. He will give it by holding off on starting his electric car production. By holding off it will help the trade deal go through. The blockage is over and the president is able to sign the trade agreement. He is happy they are able to move forward. Aaron goes to a party at Nadia’s house and is happy to see the rest of his family.

Hannah confronts John about subpoenaed Alex’s mom but he says he had to. There is a lot more here than he first thought and it doesn’t look good.