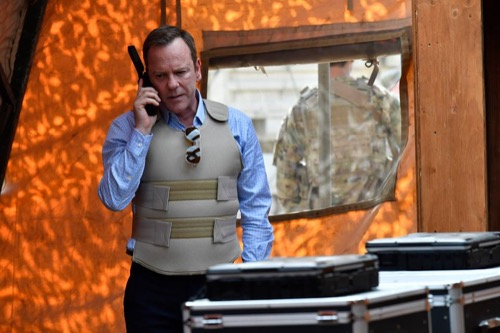 Tonight on ABC their new conspiracy thriller Designated Survivor airs with an all-new Wednesday, November 29, 2017, episode and we have your Designated Survivor recap below. On tonight’s Designated Survivor season 2 episode 8 called “Home,” as per the ABC synopsis, “While on a secret mission to Afghanistan, President Kirkman meets with two infamous warlords and must determine whom he can trust to hand over territories to the U.S., while Seth has a run-in with Washington, D.C., police that puts his job, reputation and future in the White House on the line.”

The president has gone on a secret trip. The team is on their toes as they try to keep the rest of America none the wiser. Meanwhile, Seth has just picked up his brother. They are celebrating his recent achievement on a test. They see blue lights. Seth isn’t sure why he is being pulled over. He wasn’t speeding. He tells his brother not to disclose that he works for the White House. He doesn’t need it on TMZ.

The president arrives at his destination. He meets with the troops in Afghanistan to have breakfast and celebrate all of their accomplishments. He teases and talks with the men and women as he dishes out the bacon. He is called to meet with Hannah and others in an adjoining room. They brief him on their mission to take out two powerful Afghan warlords. One of them is planning an attack on US soil.

Kendra picks up Seth at the police station. The police discovered pills in the car. Back at the White House, Emily wants to know what the hell Seth was thinking. She tells him he is benched until things are cleared.

The president sits down with an Afghan leader. They discuss their people and how to deal with the current issues.

Kendra reports back to Emily. She thinks she can have Seth’s case sealed. But they have other problems. Leo has been married and he owes back taxes. Emily cannot believe that he never told them. Leo is casual about the whole thing. It was a last minute marriage and he isn’t in touch with her. Kendra thinks that they can argue and get the marriage annulled. Emily tells Leo he needs to play press secretary for the day.

The president sits down with another Afghan leader who also tells him he doesn’t trust him. He is 2 for 2.

A reporter follows Leo after the press briefing. She wants to know where Seth and the president are. Leo avoids her questions, serving her up an answer that goes over her head.

The president is rushed out of a room where he is eating breakfast. It is a suicide bomber. The president tells his security that he refuses to leave. He cannot be run off.

Leo brings his estranged wife in to meet Emily and Kendra. They need her to review the annulment and sign it.

Kendra touches base with the President about Alex’s subpoena. Kendra needs to meet with him and Alex to come up with a game plan.

Hannah and Mike head to a nearby safe house to scope it out. She wants to know what his problem is with her. Mike thinks when she is around it seems like the president always needs a lawyer. Just as they get into a heated discussion a bomb goes off ahead on the road. They stop the truck and get out, grabbing their guns and dunking for cover. Night has fallen. Mike climbs out of the ditch and tries to force the shooter out with gunfire. Hannah covers him. Mike gets the man after a couple of shots. They make it to the safe house. Mike heads in. Hannah spits a trail of blood and a code written in blood on the door.

Kendra, Emily, and Seth watch the video of Seth’s traffic stop. Emily and Seth put the pressure on Kendra. They need her to make this go away.

The president meets with several leaders once again. He is getting conflicting reports from them and who is responsible for what bombings.

In court, Kendra shows that the officer is fishing to make a quota. He has repeatedly pulled individuals over for probable cause but failed to arrest any of them for anything. The judge dismisses Seth’s case.

A reporter from Daphne comes in to see Seth. She knows what happened to him. But since it is no longer a story she wants to know where the president is. Seth promises her an exclusive to make her go away.

The president learns from his men that the prior day’s attack was by the Packistanianss. He confronts their leader.

Emily meets with Leo’s wife. They might not be together but she needs him in her life even if it is in this capacity. Meanwhile, Kendra goes to Leo’s office. He is playing a video game. She needs the annulment papers. He never signed them.

Seth comes to see Emily. She knows he was covering for his brother who was taking pills to stay up to study for his test. Emily is mad Seth would take the blame. She and the rest of the team is his family too. She’s mad he would put her in this position given their relationship. He only expects her to do the right thing.