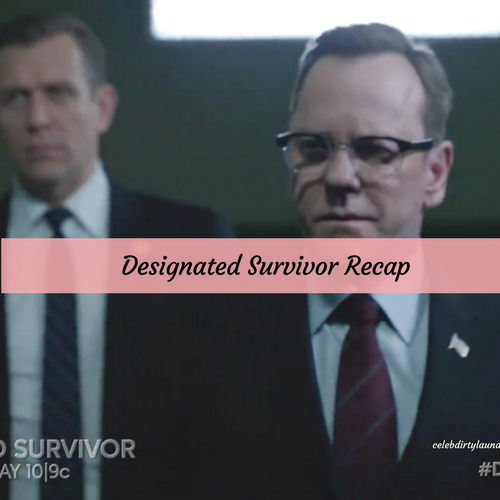 Tonight on ABC their new conspiracy thriller Designated Survivor airs with an all-new Wednesday, March 29, 2017, episode and we have your Designated Survivor recap below. On tonight’s Designated Survivor season 1 episode 14 called “Commander-in-Chief,” as per the ABC synopsis, “Turmoil in an African country forces President Kirkman to rely on an unlikely ally for help, as Hannah’s investigation into the Capitol bombing takes an unexpected turn. Elsewhere, Emily settles into her new role as chief of staff, while Aaron has to make a difficult choice.”

Tonight’s episode of Designated Survivor kicks off where we left off last week. Aaron is headed home late at night, and Charles Langdon emerges out of the shadows. Aaron’s obviously shocked sine Charles is supposed to be dead.

Charles rushes Aaron in to a church across the street – there are about a dozen people inside the chapel for a late night mass. Charles tells Aaron he needs him to do him a favor.

Meanwhile, Hannah and the FBI have been tailing Aaron. When they spot Charles Langdon, they rush in to the church with their guns drawn. The FBI’s too late – Charles slipped out the back door before Hannah could capture him.

At the White House, Seth and Emily are meeting with President Tom Kirkman – they have some meetings lined up for him for potential cabinet members. But, everyone is pretty apprehensive about joining his new administration. Former President Moss has agreed to sit down with President Kirkman tomorrow and give him some recommendations. Mike interrupts their meeting to fill Kirkman in on the Charles Langdon drama.

Hannah has Aaron in an interrogation room. Aaron swears he had no idea Charles Langdon was alive, and this was the first time that he saw him. Aaron explains that Charles Langdon wants his help getting him a deal and immunity in exchange for information – he wants a new identity.

Hannah and Mike meet with Tom and fill him in on Charles Langdon’s request – he says there’s no way he is cutting a deal with Langdon. Hannah thinks that cutting a deal with Charles may be helpful, after all he is the only person who can tell them about the conspiracy and who was trying to kill Kirkman.

The next morning, Seth stops by Emily’s office to give her a bullet proof vest to congratulate her on being temporarily promoted to chief of staff. Emily laughs it off and rushes off to Tom Kirkman’s office.

Kirkman calls Emily to his office to discuss a situation brewing in Aruba. A guerilla warlord named Atsu Kalame broke a cease-fire with the government. Apparently, he’s a really bad guy, is known to use child soldiers, and has a militia army of over 10,000 soldiers. Tom has a special interest in Naruba, he was working there years ago, he tells her to reach out to state – the US needs to help the innocent people.

Meanwhile, the FBI cuts Aaron loose so he can meet with Charles Langdon again and discuss a deal. Hannah picks Langdon up and brings him in for questioning.

Langdon explains that it all started four years ago, he met a woman named Claudine Poyet at a ball. He fell for her, but she had other things in mind. Apparently, Claudine worked for a contracting firm, and he was feeding her intel for work. He gave her information on the Capital threat assessment, and she used it to pull off killing the President. Charles has one picture on his cell phone of Claudine sleeping, Hannah recognizes the woman in the photo immediately.

President Moss arrives at the White House to meet with Kirkman. Kirkman is thrilled to sit down with Moss – but he has some tough criticism for him. Moss says that Kirkman was given an impossible job and lectures him about how he is running the country since taking over. The conversation gets awkward – and Moss makes himself right at home. It’s clear that Kirkman’s expectations of the former President were let down.

Aaron sits down for more questions from the FBI. He realizes he is in a ton of trouble, and Langdon used him to get the threat assessment file for Claudine Poyet. The trail leads to Aaron’s computer.

Alex returns to the White House, she left the kids back at Camp David and came back to check on Tom. He fills her on in his horrible meeting with President Moss earlier. Before they can catch up anymore, Mike interrupts and tells Tom it’s time for him to sit down with Charles Langdon.

Kirkman finally gets to see Langdon face to face. President Kirkman screams at Langdon over how many lives he cost. Langdon explains that during the day of the State of the Union, he wasn’t even there – he was blackmailed in to naming Kirkman the designated survivor that day. Someone wanted to make sure that Tom wound up the next President of the United States, and they killed a lot of people to make it happen.

Langdon explains that the night of the bombing, he tried to make a run for it. But, Claudine and her people hacked his car and forced him to crash in to the river. The FBI confirms his story, they found the car in the water.

Kirkman wants answers – he needs to know who is behind the conspiracy, or else he’s not cutting a deal. Langdon swears he has no idea who wanted Kirkman to wind up in the White House. But, he points out that Kirkman was the least qualified of all of the cabinet members, and that’s why they wanted him in the office, to make the United States weak.

President Kirkman meets with his staff and the Colonel to discuss his options in Naruba. Russia is dragging their feet and the United Nations is skeptical about getting involved. Kirkman is determined to stop a potential genocide though, so he orders his troops to get in to position in Naruba and pull out of Ethiopia.

Later that night, Tom and Alex sit down to have dinner with former President Moss. Shortly after they kick off their evening, Emily rushes in and interrupts – she has bad news about Naruba. Apparently, Kalama took 15 American aid workers hostage, and if the US troops try to stop him he will kill the hostages. Now, Tom has to decide whether or not save the 15 Americans or the 100,000 Narubians. Aaron stops by his office and bumps

Aaron stops by his office and bumps in to Seth. He quizzes Aaron about what’s going on with him and the FBI. Aaron won’t answer any of his questions, he gives him a letter and asks him to read it over.

President Moss has advice for Kirkman – he warns him that he has to save the 15 Americans before he worries about the people of Naruba. Moss tells Kirkman to buy back the hostages by lifting sanctions against Kalame’s millions of dollars. Kirkman doesn’t like negotiating with terrorists, but he reluctantly agrees to Moss’s plan.

Aaron sits down with Kirkman and informs him that he is resigning, and Seth is already distributing his resignation to the press. Kirkman begs Aaron to stay now that Langdon has cleared his name. But, Aaron insists on leaving, he would only hurt the White House if he came back to work because his reputations has been run through the mud by the FBI’s investigation.

Emily and the Colonel barge in to President Kirkman’s office, the negotiations with Kalame are complete and he has agreed to hand over the American prisoners – they have choppers en route to pick up the hostages. Kirkman watches the extraction through live feeds, all 15 hostages are handed over without a scratch on them. Then, Kirkman makes a bold move. He promised Kalame he wouldn’t attack his troops, but he didn’t say anything about the infrastructure. He orders the troops to bomb the bridges to prevent Kalame’s troops from getting in to the city’s capital and killing any more innocent people. After the drama in

After the drama in Naruba is handled, Kirkman offers Moss a position as his secretary of state since they worked so well together dealing with Kalame. Moss happily accepts the position – retirement isn’t all its cracked up to be.

Tonight’s episode ends with Kirkman meeting with Hannah. He authorizes her to use whatever means necessary to find the people responsible for the conspiracy. Hannah promises not to let him down.