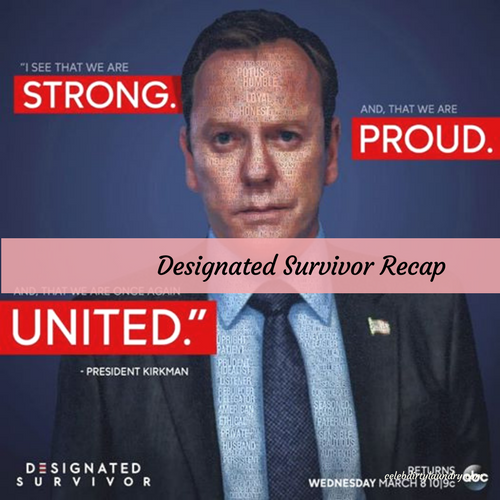 Tonight on ABC their new conspiracy thriller Designated Survivor airs with an all-new Wednesday, April 12, 2017, episode and we have your Designated Survivor recap below. On tonight’s Designated Survivor season 1 episode 16 called “Party Lines,” as per the ABC synopsis, “President Kirkman (Kiefer Sutherland) forms an unlikely alliance in the hopes of passing his first bill while Agent Ritter is briefed by FBI Agent Hannah Wells about a new alarming threat to the nation.”

Tonight’s episode of Designated Survivor kicks off with Hannah Wells meeting with President Tom Kirkman’s Head of Security. Hannah shows Mike the files that she recovered from Claudine, it looks like she was planning more attacks, and somehow she got confidential government files on the Golden Gate Bridge, the Hoover Dam, and the Statue of Liberty.

Mike fills Kirkman in on what Hannah discovered, they currently have men searching all three locations without raising any red flags. President Kirkman heads to a press conference to discuss his very first bill that his cabinet is pushing through – he’s trying to enforce stricter background checks on gun permits. But, first, the bill need to be voted on by Senate and get a majority. Meanwhile, Aaron is working with Kimble

Meanwhile, Aaron is working with Kimble Hookstraten, and they have their own issues to deal with. Aaron thinks that Kimble needs to push back against Bowman, before he pushes her out of her spot as the leading Republican in Congress.

Kirkman and his team gets to work trying to secure votes. They have the Democrat votes locked in, but they will still have to get at least 5 Republicans to vote their way in order to get the bill through the Senate.
Hannah discovers that Claudine [AKA Brooke Mathison] has made several trips to North Dakota over the last few years. She tells John that she’s travelling out there to snoop around, and has decided to take Jason with her. John warns her that Jason Atwood isn’t the most stable guy these days, and highly recommends she takes someone else with her, but Hannah won’t hear it.

Hookstraten meets with Bowman, and tries to get him in line and remind him that the Republicans need to have a united front. Hookstraten points out that Bowman’s stunt with the bill could backfire in his face. Bowman is cocky, and not interested in what Hookstraten has to say, he scoffs that she’s just a member of the old guard and should “get with the times.”

After working the phones all day and trying to secure votes, Emily heads to the bar and runs in to Aaron. She explains she had a tough day at the office, and finding a Republican to vote Kirkman’s bill through is easier said than done. Aaron thinks that he and Hookstraten may be able to help them, but it’s going to cost them, and Hookstraten has her eye on vice President.

Kimble Hookstraten is eager to put Bowman in his place, and score some brownie points with the White House. After meeting with Kirkman, Kimble calls a press conference and announces that she is supporting the President, and urges her fellow Republicans do the same when its time to vote on the background check bill.

First Lady Alex is busy working the public to get their support, and campaigning hard against gun violence and she bumps in to Bowman. He mocks her about trying to campaign to get the bill passed, but Alex brushes him off and says she just wants to stop the violence and save innocent lives.

Hannah and Jason arrive in North Dakota, and they hike to the location that Brooke was visiting. When they arrive, they are shocked to find themselves standing in an open field, surrounded by nothing but trees and grass for miles. Something seems off.

Kirkman, Moss, and Emily work hard, running around Washington like chickens with their heads cut off, trying to secure the last three votes before bill goes to Senate. Kirkman has his hands full trying to convince a Senator from Alaska to get on board. He promises her that he can find her a spot on his staff if she loses the reelection over siding with him.

Seth is freaking out – he learned that the First Lady was meeting with Senator Hunter to discuss another policy she wants to push through, and then exchanged words with Bowman in public. Emily warns Seth that it’s between Tom and his wife, and they can’t get involved, Emily tells Seth not to tell Tom what happened until after the vote is over.

Moss, Tom, and his team gather around the TV in the office to watch the Senate vote on the bill. And, it’s not going well. The Senator from Alaska didn’t have the guts to vote against the Republicans. She choked at the last minute and voted against the bill. Another republican woman shocks everyone and votes for the bill. The bill is passed with a vote of 51-49.

In North Dakota the next day, Hannah and Jason return to the site – they got a phone call and learned that there are infared photos from a plane that show a missile buried underground, that’s why the field seemed empty. Hannah and Jason head back to the field and find a hidden tunnel that leads underground.

Alex and Tom sit down to meet Senator Vandenberg. It turns out that Vandenberg had witnesses Alex standing up to Bowman the other day, and it inspired her to do the same.

Underground, Hannah and Jason discover the massive missile that Brooke had stashed away, and they also find cases of bombs that are identical to the ones used to blow up the Capitol. There are enough explosives in the bunker to blow up three more Capitols.