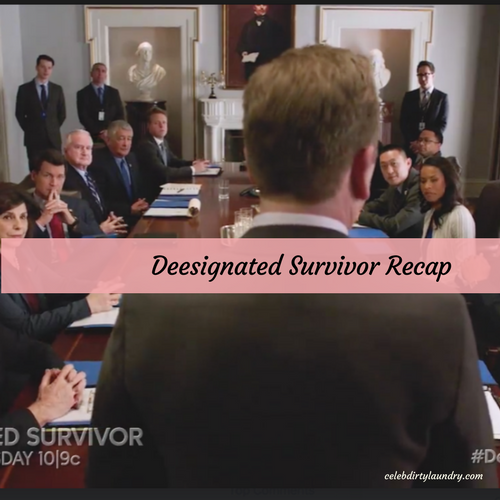 Tonight on ABC their new conspiracy thriller Designated Survivor airs with an all-new Wednesday, April 19, 2017, episode and we have your Designated Survivor recap below. On tonight’s Designated Survivor season 1 episode 17 called “The Ninth Seat,” as per the ABC synopsis, “As President Kirkman (Kiefer Sutherland) struggles to put together a new Supreme Court, FBI Agent Hannah Wells goes undercover and discovers much more than she ever could have imagined.”

Hannah is on her way to Driggs with Jason still working the private mission Tom sent her on. Meanwhile, a reporter by the name of Abe Leonard is overseas researching who was really behind the capitol bombing.

Emily tells Tom that the house looks like it is going to pass the gun bill. He agrees it is good news. Now he wants to focus on reestablishing the Supreme Court. Julia comes in to give him the 9 nominees.

A reporter Abe Leonard, who has just returned from looking into Al Sacar, comes to tell Seth that it wasn’t them who blew up the capital. They didn’t have the people or the smarts. He plans to publish the story tomorrow and would like a response from the white house. Seth tracks down Emily to tell him about Abe. Their seals took out the wrong guys. This is bad for the house.

The president sits down with the senate. Senator Bowman would like to choose his own nominees. The room grows chaotic. Tom demands they all take their seats. He tells the room that they have a broken government. They need to put the Supreme Court back together. Tom tells Bowman that he doesn’t want to be an obstructionist. He will talk to the press to tell them that Bowman is holding up what needs to be a speedy process. Tom agrees to pick the ninth seat nominee.

Jason and Hannah are traveling through North Dakota. They get out in town. A local tells them that a storm is coming.

Hannah and Jason enter a bar. They ask the owner about all of the cars with different state license plates. He tells them that they are all True Believers. They all get together on a plot of land. No-one really knows what they do besides have bonfires.

Abe shows up at the Speaker’s office. Aaron is there working. Abe wants to know why he left Tom. Aaron doesn’t want to say. Abe asks her about a candidate for VP she chose not to back as well as what Agent Hannah Wells is up to. She refuses to comment at all. Aaron leaves and calls Hannah.

Aaron is waiting on a park bench. Someone else shows up, not Hannah. The man who interrogated Aaron before. Reluctantly, Aaron tells him what he knows about Leonard, who relays all of the information to the president. Tom doesn’t want to take Leonard in, it’s a free country. They just have to see what he publishes.

Aaron meets with Emily. He tells her the Speaker wants the VP slot. Emily tells him it is a possibility and that’s all she can say.

Leonard’s editor kicks back his story. They won’t run it yet until he finds more solid ground to stand on. His article sounds like conjecture.

Leonard plans to track down Wells. She is on to something.

Hannah thinks they found the cell. She talks to what appears to be a local. He tells her he isn’t. She asks him about how to find a campground. He tells her he can’t help her. She pretends to drop her map and lifts a book, Pax Americana, out of the side pocket of his pants.

Leonard is working at his desk. Someone sends him a video link. He shows a shooting with Agent Wells in the backdrop.

Julia is waiting for Tom in his office. Tom comes in. Emily follows shortly. Bowman has said no to their ninth seat choice. They have a plan B – Julia. She is flattered.

Hannah and Jason camp out in a cabin watching the campgrounds. Hannah looks over the Pax book.

Julia returns to see Tom. She can’t be his ninth judge. She has early onset dementia. Tom is shocked. She believes in what they are doing. She wants to see it through. He agrees and apologizes that she is going through this.

Hannah and Jason drive to a bridge that is being guarded by men with shotguns and a woman who tells them that they are on private property. They leave.

Leonard leaves his office. He senses that he is being followed. He stops on a path and takes a selfie, getting the man in the photo. When he turns around the man is gone.

Tom reconvenes the meeting with the senators. He has Julia explain that they will not supply a 9th judge. They will go forward with the 8. The senators all agree.

Seth concludes his daily press conference. Leonard is there. He tells him to have the FBI stop following him. Seth tells him he needs help. Leonard chuckles and tells him to back off.

Tom and Julia share a beer in the oval for her clever idea. The grandfather clock alerts her to the hour. She needs to get to NY, she has class in the morning. Before she goes, she tells him to remember her like this.

Leonard finds an envelope on the hood of his car. He gets a call from an unknown number. They have something they need to discuss. The man tells him to meet him in front of the Roosevelt Bridge in an hour.

Hannah and Jason camp out in the woods, watching from a distance. It’s dark. The True Believers light a circle of bonfires. A chopper makes a landing. It’s Lorenzo who gets out. Hannah is in shock!