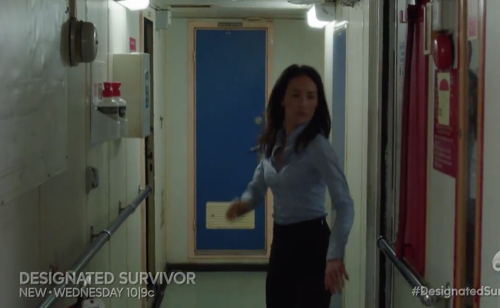 Tonight on ABC their new conspiracy thriller Designated Survivor airs with an all-new Wednesday, May 10, 2017, episode and we have your Designated Survivor recap below. On tonight’s Designated Survivor season 1 episode 20 called “Bombshell,” as per the ABC synopsis, “President Kirkman’s first international summit is derailed when journalist Abe Leonard publishes an explosive article. Meanwhile, Hannah Wells uncovers the conspiracy’s next target. ”

Hannah hides as her captors realize she has escaped. She sees a small boat she can use to get off the ship. Seth gets airsick while on Air Force One. Cornelius speaks to the President about the upcoming summit. The President wants to put a new initiative on the table at the summit. Emily runs into Aaron at a restaurant and talks about the summit. She wishes him luck.

The President and Cornelius review all of the key players they will see at the summit. They need support for their nuclear reduction plan. Hannah works to get off the boat by breaking into the radio room. She sends out a mayday and then is recaptured. The President and Cornelius address the world leaders about the nuclear decrease. While no one commits they are interested.

Mike brings in a computer whiz who works to figure out who is deleting all of the Browning Reed files. It is the only lead Mike has in finding out who the mole within the agency is. Abe Warner publishes a story that the administration got the wrong people behind the bombing. All of the President’s people say they have to issue a strong reply that Abe is wrong. The President can’t because Abe is correct. The wrong people were arrested and blamed for the bombing.

Cornelius is very anger with this news. He can’t believe there is a mole in the white house and the President wasn’t honest with him. The foreign allies want to meet with the President and demand an explanation. Lloyd and Whittaker talk about the Abe Warner story and think everything is falling into place. They also believe Abe has served their purpose and they are done with him. The coast guard is able to decipher Hannah’s message and send out a search party.

The summit does not go well for the President. Very few of the allies want to discuss the President’s initiative until they know the truth. The President can’t offer any more information. Abe is called into a meeting with the FBI. Emily calls and teases Seth about getting sick on the plane. The Coast Guard can’t find the ship Hannah is being held on.

The President thanks Seth for defending him during the press conference. The allies refuse to discuss the President’s initiative any further. The president and first lady talk about the situation and she offers him support. The FBI and the Coast Guard get a lead on the ship. The Prime Minister of France agrees to meet with the President. She will support him at the next summit. Whittaker enters the computer system to erase the remaining Browning Reed files and Mike thinks he has him but he is able to escape before his true identity can be revealed.

The President and Cornelius review the trip on the plane back to Washington. Cornelius is proud of him but they still have a big issue to face when they get home. The media calls the day the worst in his Presidency so far. The FBI intercepts a ship as it enters the port in Boston but Hannah is not on it. Hannah wakes up in the back of van and realizes it is loaded with explosives.THE END