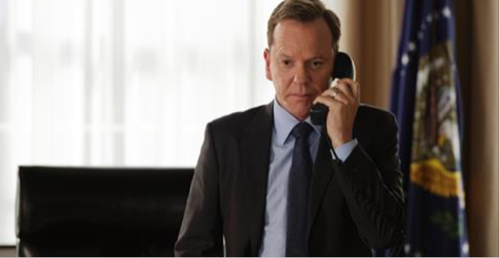 Tonight on ABC their new conspiracy thriller Designated Survivor airs with an all-new Wednesday, May 3, 2017, episode and we have your Designated Survivor recap below. On tonight’s Designated Survivor season 1 episode 19 called “Misalliance,” as per the ABC synopsis, “As the White House gears up for President Kirkman’s first international summit, Kimble Hookstraten faces her toughest political battle yet when her speakership is challenged. ”

A van speeds into a parking lot and pulls a tied up Hannah out and puts her into the back of a semi-truck. Lloyd gets a text that says, “The package is out for delivery.” The president speaks to a group of students touring the white house. The teacher tells the president that the grant that funds the student’s group may be cut. He asks if the president can help and he will look into it. Mike worries because he hasn’t heard from Hannah. He finds her car in a hotel parking lot but her room is empty. All her things are there but she is gone. Emily and Seth talk about his upcoming trip to NATO.

Kimble testifies in front of the ethics committee and asks that they review her record and reputation when they vote. Mike reviews the hotel parking lot footage and sees that Hannah was kidnapped. He immediately alerts the president. Hannah was getting close to a case involving Browning Reed, a military contractor and thinks he was involved in a conspiracy.

The president is briefed about the French’s concerns about nuclear weapons. There is an opportunity to stop the arms race and start to stand down. They will need other countries to cooperate but it is worth a shot. Wells tries to break her chains but is unsuccessful. A guard brings her food and she demands to speak to Lozano. Kimble lets the president know she hopes her testimony went well and she will continue to do her job. He asks her to look into getting the grant continued that funds the students program. Unfortunately, the Ways and Means committee is in charge of that grant. The leader of the committee is also the chair of the committee investigating Kimble. She can’t be of any help. She suggests the president reach out to him himself.

The president meets with the head of the Ways and Means committee and asks for his help in approving the grant. He refuses to work with him. Lloyd makes a speech against the government and the crowd goes wild. Kimble gets word that the committee is going to vote 9 to 3 against her. The CIA plant a bug on Lloyd and follow him after he finishes his speech.

The president and his team meet to prepare for the summit. Emily reports that she is working on getting the grant extended. Kimble meets with the leader of the Ways and Means committee and says she will resign if he will extend the grant for the education program before she goes. Whittaker meets with Lloyd while a CIA agent listens in. He outlines their plan and admits to kidnapping Hannah. The agent is killed by one of Lloyd’s guards before he can report what he found out back to the president.

Mike realizes that there is a traitor that is working with Browning Reed. Alex tells the president she wants to move the kids to Washington to be with them but he isn’t sure. They are interrupted before they can finish their discussion. Kimble tells the president she has decided to resign both the speakership and her seat. He tries to convince her to stay but she is firm in her decision. She did however get the grant program extended. He refuses to accept her decision.

Seth continues to gloat to Emily about his upcoming trip on Air Force One. Mike doesn’t want the president to leave the country but he insists he has to go to the summit. Alex and the president talk and he shares that he feels guilty about what is happening with Hannah. The president and Alex watch the students perform and he announces Kimble will be his nominee for Secretary of Education.

Hannah works to pick the lock on her chains. The present and his team board Air Force One and Seth is thrilled to get his picture with the president. Hannah gets out of her chains and escapes the semi. She realizes that she is being held on a ship in the middle of the ocean.