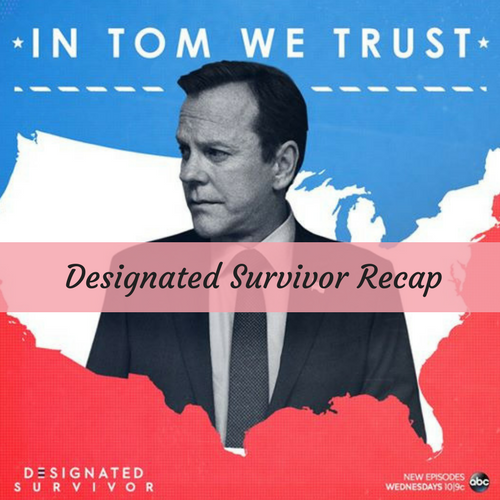 Tonight on ABC their new conspiracy thriller Designated Survivor airs with an all-new Wednesday, March 15, 2017, episode and we have your Designated Survivor recap below. On tonight’s Designated Survivor season 1 episode 12 called “The End of the Beginning,” as per the ABC synopsis, “Circles must tighten as a new discovery within the conspiracy emerges. Meanwhile, tension rises between Aaron and Emily as suspicions loom in the White House. Finally, a new lead places Agent Wells closer than before to the truth.”

Tonight’s episode of Designated Survivor kicks off in President Tom Kirkman’s hospital room – his security officer has just brought Hannah Wells to speak to him face to face. While Hannah is in the middle of explaining that Charles Langdon is very much alive, and faked his death, Alex walks in and interrupts. Hannah refuses to finish talking in front of the First Lady.

After Alex excuses herself, Tom lets it be known that he doesn’t like hiding things from his wife. Mike actually agrees with Hannah Wells though, he tells Tom that it’s time that he “tightens his circle,” this is a matter of national security and the more Alex knows will put her in danger. Hannah and Mike leave to devise a plan to bring down MacLeish, Tom orders them to come back and fill him in when they have a strategy.

Meanwhile at the White House, Aaron and Emily are still bickering because he found out that she was investigating his phone calls from two years ago. They put their differences aside though, because they have bigger problems, apparently Vice President MacLEish has called his own press conference, and nobody knows why or what he plans on saying.

There is no acting attorney general, so Hannah decides to think outside of the box and find him some legal counsel. Back at the hospital, Alex and Tom watch MacLeish’s press conference, he raves about Tom’s miraculous recovery and taking down his shooter. Alex is offended that Tom has nerve to hold a press conference on his own.

After the conference is over, Alex tells Tom that Emily came to her while he was in the hospital and revealed that Aaron is the one that made the phone call to the Pentagon. Tom is upset that Emily is involving her in White House business, and he refuses to believe that Aaron would betray him.
Hannah needs more proof before she can take MacLeish down. She decides to pay Jason Atwood a visit in prison. But, he isn’t interested in recanting his statement and helping them take down MacLeish, it’s too dangerous. Jason shouts at Hannah that if she wants to help, she will help find his son Luke.

Tom calls Emily to his hospital room to discuss Aaron. He tells her to keep what she found confidential. Tom doesn’t think that Aaron is a traitor, but he doesn’t want to go public with what they found until he can prove Aaron is innocent for sure.

MacLeish stops by the hospital to see Tom, the President and Mike manage to keep their composure and not let MacLeish know that they are on to him. Afterwards, MacLeish fills his sneaky wife Beth in on their meeting. She reassures MacLeish that they will never be discovered, and she has people cleaning up all of the loose ends as they speak…including Hannah Wells.

Tom explains to Aaron that he ordered Emily to vet him, and keep it quiet. Aaron feels guilty after their chat, so he tracks Emily down and makes amends with her. They seem to be on good terms now, but things are certainly still awkward between them.

Hannah Wells is working close with another FBI agent she trusts to try and dig up more dirt on MacLeish. She decides to rattle some of the men that went to Kunar Province with MacLeish. She tracks down a man named Alvin Joyner at a garage he works at. She questions Alvin about the mission, and the manifest says there were more people involved, Alvin gets cagey and clearly paranoid when he realizes that the FBI is on to them.

Speaker Hookstraten is snooping around, she knows that something is fishy about MacLeish. She corners Aaron and demands to know why they took out the shooter instead of questioning him. After some badgering, Aaron reluctantly admits that MacLeish ordered “Shoot To Kill,” even though they could have taken the shooter in to custody without incident.

Just like Hannah predicted, Alvin Joyner reaches out to MacLeish – he’s paranoid after a visit from the FBI. MacLeish wants to pay Alvin a visit and do a little hand-holding and reassure him that everything is okay. His wife Beth warns him that it is a horrible idea, she thinks it’s time to eliminate the problem and kill Joyner, but MacLeish doesn’t want to hear it. Meanwhile, MacLeish’s problems are just beginning – the FBI has finally found Luke’s body.

A lawyer shows up at the precinct and claims she is there on behalf of Hannah’s family to represent her, they inform her that Hannah has been released. The lawyer texts Beth and tells her that Hannah is no longer in custody. Beth puts two and two together and realizes that Hannah is the one that visited Alvin and set him up.

Meanwhile, Hannah is watching MacLeish and Alvin’s secret meeting in the secretary. She records their conversation and gets more than enough to arrest him. Hannah runs out with her gun drawn and tells MacLeish he is under arrest. Before Hannah can take him in to custody, Beth shows up. She shoots and kills her husband, and then shoots herself in the head and takes her own life.

Tonight’s episode of Designated Survivor ends with Tom being released from the hospital, where he gets a standing ovation on his way out the door.