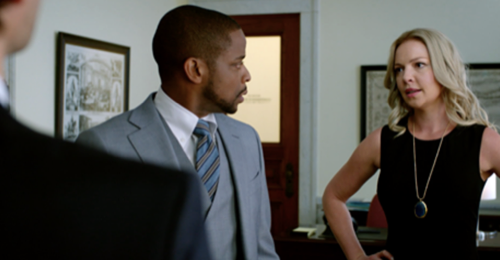 Tonight the Season Premiere of the CBS series Doubt airs with a Wednesday, February 15, 2017, season 1 episode 1 and we have your Doubt recap below. On tonight’s episode called, “Pilot” as per the CBS synopsis, “Life changes for Sadie, an idealistic lawyer played by Katherine Heigl, when she falls for her client, Billy Brennan (Steven Pasquale), a man accused of murdering his ex-girlfriend 24 years ago.”

So make sure to bookmark this spot and come back between 8PM – 10PM ET for our Doubt recap. While you wait for the recap make sure to check out all our Doubt news, spoilers, recaps & more, right here!

The show begins with the prosecutor holding a news conference on the courthouse steps. She says that just because Billy Brennan is the son of a senator does not mean he will be allowed to get away with murder. Sadie interrupts to say they just want their day in court. The group appears in court and it is revealed that Billy’s old boarding school roommate has come forward to report that Billy confessed to the murder of his then girlfriend 24 years ago. Sadie argues that there is no physical evidence tying Billy to the murder and that the roommate is an unreliable witness. Billy is released on 5 million dollars bail.

Sadie gets a call that Isiah is in jail again for insulting a judge during a trial. He is released and they return to the office to discuss Billy’s case. Sadie tells the group that the prosecutor offered a 2-year sentence for a guilty plea. Tiffany and Cameron join the group and report their last case ended with a hung jury and the case will be retried again the next day. Isiah asks Sadie to review the case. He can’t believe that Cameron couldn’t convince the jury of their client’s insanity since he believes he is Jackie Chan. Albert offers

Cameron advice on what kind of jurist to look for the next time. He tells Cameron to have the client stop taking his medications so the jury can see just how sick he is.

Sadie and Billy grab a hamburger. Billy tells Sadie that he is developing feelings for her. She tells him it is normal but they should go. He says he needs to know she believes that he didn’t kill his girlfriend. Albert arrives at the office and can’t believe that a man looking for a job is still in the office hoping to speak to Isiah. Sadie tells them that Billy will not take the plea. He insists he is innocent.

Cameron tries to explain to the judge why she now wants her client off his medication after she had previously asked the court to require him to be medication compliant. He decides it will be up to the client. Isiah meets with Sadie, Robert and a private investigator who reports that Billy’s roommate is clean and will make a very strong witness against Billy.

Robert tells the group he is also worried about a witness who will report that Billy and his girlfriend were seen fighting the night she died. Billy was also seen the next day with scratches on his face. Isiah tells them to try to come up with a plausible defense or Sadie will have to use her “scary” voice to convince Billy to take the plea.

Cameron appears in court with Tiffany and they disagree about the jury selection. Sadie and Robert question Billy’s grandmother about how Billy got the scratch on the face. She tells a story of their angry cat. Robert reports that his fiancé has called off the wedding because he forgot about their dog due to always being worried about work. Sadie says they do noble work and he should be proud of his dedication. Roberts says he is proud BUT single.

Cameron’s court case begins and is not going well. The witness tells a moving story of how he watched his wife being pushed in front of a train by a strange man doing karate. Cameron’s client sleeps at the table during the testimony. Sadie, Robert and Billy meet in the park where Amy’s body was found. Billy says she broke up with him and he left her there. They ask why he left her alone in the park at night. Billy says he didn’t want her to see him cry. Robert indicates they best chance is trying to get the roommate’s testimony thrown out.

As court begins, the client and Cameron talk about him refusing his medication for a second day. The hearing begins for Billy and the roommate takes the stand. He tells the jury that Billy told him he killed Amy while they were in board school together. It says it was part of the therapeutic process. Sadie asks to speak to the judge in her office and argues that the conversation was confidential since it was part of their treatment at the school and therefore should not be allowed at the trial. The judge denies Sadie’s request.
A doctor testifies that voices were directing Cameron’s client and that is why he pushed the woman in front of the train. Her client begins to act strange and the trial takes a lunch break.

The man who wanted an interview with Isiah shows up with evidence that Billy’s roommate has made a book deal for over $250,000 to tell his story. Sadie and Robert now feel confident refusing the plea bargain and taking the case to trial. The prosecutor lets them know that the murder weapon has been found.

Cameron’s client takes the witness stand and tells his story. As he gets challenges by the prosecution he begins to bark and the jury looks frightened. Isiah meets with (the man who wants a job). Nick tells Isiah that he got his law degree while in prison and that he needs Isiah to hire him so that he can sit for the bar exam.

Sadie goes the hospital and lets Billy know that the murder weapon has been found. It has Amy and an unknown person’s blood on it. She asks for his blood type. His blood type is a match for the second blood found on the weapon. Sadie immediately tries to get the weapon throw out as evidence since it was misplaced by the police department for several years. Before the judge can rule Billy interrupts to say he wants to submit his blood to prove it is not his on the weapon. Robert and Sadie angrily tell Billy he is making a bad move. He insists because he cares about Sadie and needs to remove any doubt she may have about his innocence.

Cameron makes a strong closing argument and her client is found not guilty by reason of insanity. Sadie and Isiah have a drink and he asks if he needs to take her off of Billy’s case. He says it is obvious she is falling for him. She argues Billy is a good man but Isiah tells her she has to end whatever is going on between them. She goes to Billy and tells him she have to recuse herself from the case. They kiss but she leaves before it can go further.

Sadie goes to visit her mother in prison and tells her she has to beg to be released at her next parole hearing because she needs her. She says she has met a guy but it is so complicated. She NEEDS her mother. They hug.THE END.