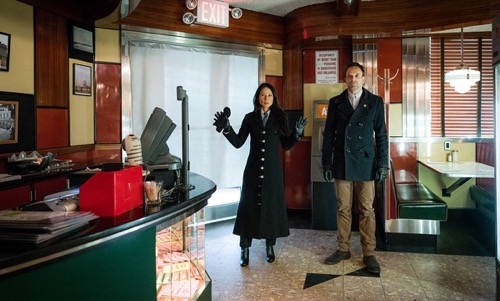 Tonight on CBS their crime comedy-drama Elementary premieres with an all-new Sunday, January 29, 2016, season 5 episode 13 called, “Over a Barrel” and we have your Elementary recap for you below. On tonight’s Elementary Season 5 episode 13 as per the CBS synopsis, “A kidnapper threatens to start executing his hostages, including Joan, (Lucy Liu) unless Sherlock (Jonny Lee Miller) finds the person responsible for his son’s death within the next 16 hours, when the statute of limitations on the crime runs out.”

A man shows up looking for help from Sherlock. Watson tells him that they are in the middle of something, but he can come in. Sherlock is busy in the other room with Mason, who is irritated by the man. The man tells Sherlock that his son Conner was attacked. He wants to find out who did it. After his son was attacked he died a year later of an overdose. Sherlock tells him that he gets an awful lot of cases and can’t take them all. He can’t help him.

The next day at the precinct, the man shows up again. Sherlock tells him he can’t be of help once again. Angry, the man leaves and goes to a diner. He walks in and pulls out a gun, taking them all hostage. When the woman behind the counter asks him what he wants he says doesn’t want money, he wants Sherlock and Watsons help or he will start shooting.

The captain doesn’t think Sherlock should pay him a visit. He wants him to call first. But Sherlock insists he will be okay. Sherlock goes to the diner with Watson and enters. He threatens to shoot everyone and he won’t let Watson leave either. She has to stay in the diner.

Sherlock gets to work looking at text records from 5 years prior. Detective Bell and Sherlock try to decode and make meaning of Conner’s text messages to a man they believe could have been his lover, a lawyer.

They pay him a visit at the court where he is working cases. Sherlock and Bell learn from him that Conner failed out of law school and started working at a warehouse. His father had no idea. Sherlock calls his father to break the news and to ask him if any companies he lists off sounds familiar at all when it comes to Conner.

Watson asks to make coffee. The man is angry and says no. He finally agrees. She tries to talk to him. He tells her not to bother. She tells him that based on his supplies he doesn’t appear to be planning to kill everyone. He doesn’t have enough ammo. He breaks down and tells her he only plans to kill one man – the man in the corner that is tied up. He is the former detective who worked on Conner’s case and failed him.

Sherlock and Bell visit the warehouse. They head back to Sherlock’s with video footage. They think they have come across a smuggling operation. Is it connected to Conner? They call the fleet manager in. He swears he wasn’t involved in anything. He says it had something to do with a local gang who threatened him. They wanted access to his trucks. He did what he was told so he wouldn’t die. Shortly after the gang disappeared.

Bell and Sherlock need information. They head to the neighborhood where Sherlock wears a sign “looking for bad guys.” A couple of men pull up. They want to talk. Bell and Sherlock get in. Meanwhile, Watson talks to the distraught father who has medical markers that indicate he is dying of skin cancer. That’s why he doesn’t care. He wants to die but before he goes he wants answers.

Bell and Sherlock are taken to a rival gangs head leader who says that the gang involved in the smuggling has disappeared. Sherlock points out that one of their current members has tattoos from the old gang he didn’t manage to have taken off completely. Sherlock questions him. He shares that after one of the smuggling jobs the gang disbanded.

Bell and Sherlock go off the few tips they get and head to a warehouse filled with barrels. Sherlock opens one and finds maple syrup. It is being sold with guns and drugs. They call in one of the men they discovered was involved. He tells them the leader was a silent partner and know one can ID him except a man who died.

Watson offers the father a doctor who can help him with his cancer. Holmes goes on a tear to Bell. He knows who the silent partner is! Bell tells him that it’s too late. They had a midnight deadline on the case because of the statute of limitations. Its 12:05.

Sherlock calls the diner. He tells the father that he solved the case. The father is angry. They are to late. They failed. Outside the diner, the swat team waits. They want to go in. The captain says no. Inside, the angry father takes his anger out on the retired officer who he thinks failed his son. Watson tries to reason with him. This is no way to honor his son’s memory. Watson saves his life when she tells him not to move. There is a sniper outside. He thanks her and comes to reason.

Watson gets out safe with the others. The father is taken into custody. Sherlock is still working the case. He is going to find a way to get Conner’s killer. And he does when he finds out that the killer went to Canada for a hockey game. Leaving the country added an extra 27 hours to the statute of limitations. They got him just in time thanks to Sherlock’s discovered loophole.