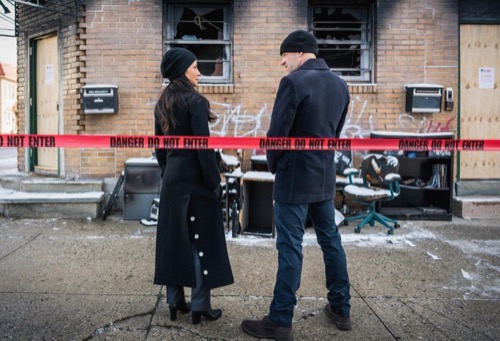 Tonight on CBS their crime comedy-drama Elementary premieres with an all-new Sunday, February 19, 2016, season 5 episode 14 called, “Rekt in Real Life” and we have your Elementary recap for you below. On tonight’s Elementary Season 5 episode 14 as per the CBS synopsis, “Holmes (Jonny Lee Miller) and Watson (Lucy Liu) investigate the murder of a former professional eSports video game player who died after being assaulted in front of his fans during a live video stream. Meanwhile, Shinwell seeks advice from Joan when his teen daughter asks to meet with him for the first time in years.”

Shimwell and Watson meet in a coffee house and he is very nervous about being in public. He asks for Watson’s advice because his daughter wants to see him after all these years. Watson tells him it is danger and to be careful. OG Pwnzr is playing a video game on a live webcast. While he is playing someone hits him from behind. Calls start coming into the police station reporting the assault. The problem is no one knows OG’s really name or where he was during the assault.

Tom’s meets with his niece and Watson to learn more about the gaming world. She tells him it is a multi-billion dollar industry. OG was an ex-professional, a blogger and an agent looking for new talent. Holmes calls Watson to let her know that he is on the case and has found the crime scene. Unfortunately, OG is dead. Watson and Marcus meet Holmes there and search OG’s cell phone. They use the information to go to a gamer’s house.

Shinwell goes to his daughter’s school and she tells him she is in trouble and needs his help.

The gamer denies killing OG but says they did have a deal that went bad while he was trying to hire a new gamer Tendu. Holmes, Watson and Marcus go to Tendu’s hotel room. He is gone but they find the murder weapon. Holmes thinks Tendu has been framed. They present the evidence to Tom but he has a hard time believing that Tendu was framed. Watson searches Tendu’s social media page looking for clues.

Tom and Holmes meet with an attorney and wait for her client to appear. She shows up late to talk about freeing the police department’s mounted unit. She says they must end equine slavery. Holmes tells her they asked to meet with her to discuss the end of seal hunting. They explain that a recent murder they are investigated was committed with a seal hunter’s axe. They also let her know that they have seen the threats she made to Tendu on his social media account.

She admits that she met with Tendu and they agreed to work together. There is no way she would hurt him. Shinwell meets with Watson and shares that his daughter is having a problem with a gang banger in her neighborhood. His daughter has asked him to “take care” of it. He wants to help her but doesn’t want to risk his future of leaving crime behind. He asks Watson for her help.

Holmes and Marcus find Tendu’s girlfriend’s best friend and think they know what happened. They realize that Tendu’s girlfriend was actually a prostitute who was working for an escort agency that is controlled by human traffickers. Tendu was trying to buy her freedom when he disappeared. The team goes to the agency but the building was burned down two days ago.

Shinwell meets with the gang banger who has been harassing his daughter. He offers to get rid of a couple local drug dealers in the area and this will allow him to double his business and profit. Shinwell will make it happen if his daughter is no longer in danger. The gang banger takes the deal.

Marcus and Tom bring in the madam from the escort agency and let her know they can tie her to the arson of the building. She admits that she set the fire but claims it was an accident. She also tells them Tendu paid off his girlfriend’s immigration debt of $100,000 in cash. Tendu was the Richard Gere of Pretty Woman. She denies hurting anyone. Holmes believes she is telling the truth.

Watson continues to search Tendu’s social media account and finds another clue. She makes a call and realizes that Tendu signed a multi-million dollar endorsement deal which paid him the $100,000 he used for his girlfriend. Tendu was also paid more cash which he wired to his village in Canada. Holmes says the murder and frame up of Tendu is all due to global warming.

Holmes and Marcus follow the cell phone ping for a known hired killer that Holmes believes is involved in the case. They see him walking and Holmes chases him. He is arrested and the team tells him they have strong evidence that he killed OG. They offer him a deal if he tells them who ordered the hit. Holmes tells him they know the corporation he works for wanted the people in Canada to sell their land so that his company could put ports on the newly opened Northwest Passage. This will make millions for the stock holders.

Watson and Tom meet with Ms. Lundquest (the lawyer for the animal rights activist) and tell her they know she has been trying to get the port locations which will allow her to make partner. This position would make her millions every year. They tell her the hired killer told them everything and she in under arrest. Shinwell tells his daughter that the gang banger won’t be bothering her anymore and that he is glad they are back in touch. She tells him not to be. She only called him because she had no choice. They aren’t family.