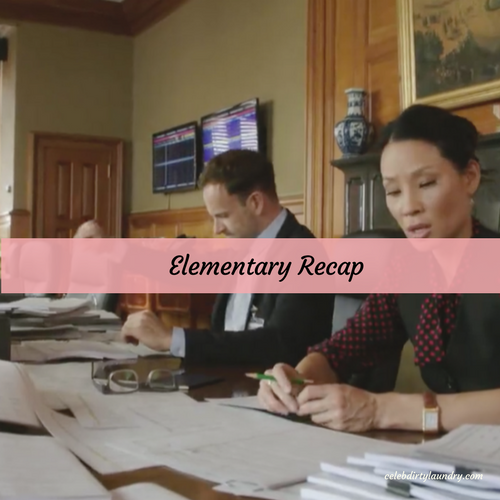 Tonight the CBS series Elementary airs with an all new Sunday, April 30, 2017, season 5 episode 21 and we have your Elementary recap below. On tonight’s episode called, “Fly Into a Rage, Make a Bad Landing ” as per the TV Guide synopsis, “Bell’s girlfriend, Chantal, is assaulted and her ex-husband is killed soon after, in what Holmes (Jonny Lee Miller) and Watson (Lucy Liu) discover is a staged suicide. They then search for one suspect behind the linked crimes.”

The captain meets Marcus at the hospital. Chantel has serious injuries and is in ICU. Sherlock is there and he thinks her assailant broke in and was waiting when she got home. The assailant also emptied his bladder on her bed after she was assaulted. Marcus is sure it was her ex-husband, Roy. Sherlock promises him that justice will be done.

Roy is called in for questions but his lawyer doesn’t allow him to say much. He says he was working and then makes a veiled threat and leaves. Sherlock goes to investigate Roy’s alibi and Watson goes to the hospital. Marcus tells her of the time his mother was hospitalized when he was nine. She almost died and it was very hard for him.

Roy shows up at the hospital and Marcus tries to attack him but security holds him back. Roy is sent away. Sherlock pulls some strings and gets access to the tapes which confirm Roy’s alibi. The team tries to figure out who is setting Roy up because a DNA test confirms it was Roy’s urine on the bed. The captain goes to interview him and finds him dead in his car of a self-inflicted gunshot wound to the head.

After forensics search the scene it is determined that Roy didn’t kill himself. He was murdered. The team believes that whoever killed Roy also hurt Chantel and set up Roy. Sherlock and Watson think it could have been one of the people Roy was tailing for his job as an investigator for divorce lawyers. Sherlock and Marcus head out to interview the partners of the firm.

He offers the name Ukhov and encourages them to read the newspapers. They learn that Ukhov is a multi-millionaire and he has been arrested twice for beating his wife. Marcus interviews Ukhov and lets him know that this finger prints were found in Roy’s car. He says he realized Roy was following him about a week ago and slapped his window but that he never killed anyone.

As Marcus is interview Ukhov, Sherlock sneaks into his office and takes photos of several pieces of paper that indicate the Ukhov was investigating Roy and had Chantel’s home address. They think he is the murderer but need more evidence if they want the charges to stick.

Marcus watches Ukhov at his home and sees someone hit him and steal his car as he tries to leave. Just as Marcus is going to get him help Sherlock calls him and admits he was the one who just attacked Ukhov. He tells Marcus to meet him immediately. They need to talk. Sherlock asks Marcus about the story he told Watson regarding his mother. He says he knows that his mother wasn’t hit by a car. Marcus’s father beat his mother. Marcus says she wasn’t they only one he beat. Marcus thanks Sherlock for stopping him from attacking Ukhov. He would have done much worse.

Sherlock and Watson find the man who Ukhov hired to investigate Roy. He says he didn’t give the information to Ukhov until yesterday morning. Chantel was attacked three days ago and Roy was killed two days before. Ukhov isn’t the killer. They team goes back to the beginning and review all of the people Roy was investigating. They find that Roy had a safety deposit box and they get a warrant to open it. Inside they find $100,000 in cash and a list of clients he had been tailing. Instead of giving the information he found to the divorce lawyers he was blackmailing them to keep quiet.

Sherlock call Ukhov’s ex-wife to his office and explains what he thinks happened. Sherlock then calls Watson, Marcus and several other women who hired to firm Roy worked for to meet in the office. Once everyone is there Sherlock ask the partner of the law firm to join them. The team discovered that the partner would find out how much money the men his client was divorcing had and instead of telling the women he would get a cut of the money to keep it secret. Roy discovered what he was doing and demand payment. The partner’s finger prints were all over the money. They suspect that Roy demanded more money and instead of paying it he beat Chantel and set Roy up to take the fall but when that didn’t work he killed Roy.

He denies it but Marcus tells him that they have proof that Roy took a drug test and the partner paid the tech to give him Roy’s urine so he could use it to set Roy up. He is arrested.