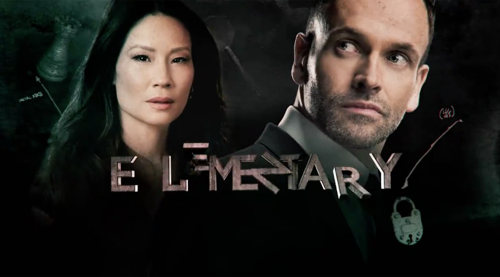 Tonight on CBS their crime comedy-drama Elementary premieres with an all-new Sunday, January 8, 2016, season 5 episode 11 Winter Premiere called, “Be My Guest” and we have your Elementary recap for you below. On tonight’s Elementary Season 5 episode 11 as per the CBS synopsis, “Holmes (Jonny Lee Miller) and Watson (Lucy Liu) race to find a woman who has been held captive for years before the kidnapper takes drastic steps to avoid being caught. Meanwhile, Joan becomes frustrated when Shinwell refuses to focus on his informant training.”

They seem like a normal couple having a bad day until he tells her not to pout all day and attaches a wire to a collar around her neck. We see Holmes with the captain at an office building. Holmes reads the lips of a man sitting across the room – the same man who attached the girl to a dog collar. He follows him to the elevator and snatches his cell phone without him seeing. Holmes looks through the phone and sees a video sent by the woman. She looks sad and upset, dancing while attached to the collar with the wire. The man comes up from behind Holmes. He wants his phone back. He begins yelling. The captain arrives. Holmes says that he took it by accident. He lets the man go and continues to lie to the captain about what just happened.

Holmes arrives to see Watson and Shinwell. He tells him what he saw and wants to go and help the woman. They take off right away. They go through the man’s apartment but find nothing except for a DVD of the movie Mannequin and a bunch of pirated DVDs.

Back at police headquarters, Holmes questions the man with the captain. The man – Mr. Decker – isn’t speaking. They tell him they are determined to find the woman. Watson sees that he deleted most of social media and did something to his phone. Watson wants to go see his ex-wife to get more on him.

Meanwhile, Holmes comes across a woman who could be his victim. She walked off a cruise shup and hasn’t been seen in 5 years. Holmes and Det. Bell meet with a close friend of the woman. The woman is mad because she reported her friend missing but the police didn’t care, they didn’t listen. She points out that there was a man who was a mechanic on the cruise ship who was always lurking around the girls.

Holmes and Bell start looking into the mechanic who did time. They track him down but realize that he isn’t Decker’s accomplice. Decker gets out of jail. Before they release him they try to cut a deal with him. He needs to give the name of his accomplice for leniency. He laughs at them.

We see Shinwell get into the car with a guy who has a star tattoo on his hand and a gun on the side of his car door. Shin tells him that his people don’t want a taste of his kilo. The man gets mad. He tells him to get out of his car.

Back at the house, Holmes is trying to work the case while listening to jazz. Watson thinks that he is sulking because he feels bad for the lady being held captive. Holmes is frustrated. He can’t find any associates of Decker who would help. Holmes gets a call. It’s the captain. They lost the tail on Decker. The captain tries to figure out where he could have gone to. They have a radius narrowed down that involves roughly 2000 houses. Holmes thinks combing the dunes is the best bet. The captain has the k9s and a couple of units go out.

The next day, Watson, Holmes and the captain are called to the beach where there is a large amount of blood in the sand. No body was found. Holmes does however, find a set of keys. They discover the house. The police head in. They call Watson and Holmes to the scene. They have found a woman, but not the woman they thought was being held captive. Decker must be keeping her somewhere else.

Watson and Holmes look around. Watson notices a few clues and after the DNA from the beach comes back (it was Decker’s) it’s clear that his ex was behind it. They race to her house where she is pouring gas on everything.  She killed Decker in the dunes and she also had the missing woman in thr trunk of her car.

In the meantime, Shin has finally sat down to work on the locks, making Watson proud.