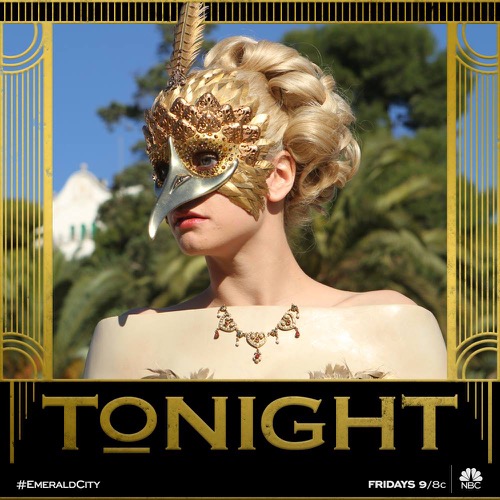 Tonight on NBC their new fantasy drama Emerald debuts with an all new Friday, January 27, 2017, season 1 episode 5 and we have your Emerald recap below.  On tonight’s Emerald season 1  episode 5 as per the NBC synopsis, “West interrogates Dorothy (Adria Arjona) using some enchanted methods. Meanwhile, the Wizard seeks help from the Kingdom of Ev as he plans the construction of a weapons arsenal; and Lucas may recover his memories thanks to an old acquaintance.”

This certainly looks like a fun new series you don’t want to miss. So make sure to bookmark this spot and come back between 9PM – 10PM ET for our Emerald recap.  While you wait for our recap make sure to check out all our television spoilers, news, recaps and more, right here!

Emerald City begins tonight with Dorothy (Adria Arjana) being escorted into Oz by Ojo (Olafur Darri Olafsson). He throws her down to the ground where West (Ana Ularu) wants to know if she is a good or bad witch.

Eamonn (Mido Hamada) brings Lucas (Oliver Jackson-Cohen) to his home, he carries in Sylvie (Rebeka Rea). Immediately, Eamonn’s daughter takes Sylvie to get some food. Eamonn explains to Lucas he was his greatest soldier; Lucas questions if he was guilty of witchcraft and responsible for killing all those people. Eamonn is staggering from his wound, but he orders Lucas to stay behind so the men don’t find them.

Ojo tells West that Dorothy is the one who killed her sister, East (Florence Kasumba), but he trusts her to be fair. West says she will be fair to him but not her. He reminds her that she said she would free his wife from the Prison of Abject. She tells him to come back tomorrow and his wife will be waiting.

Tip (Jordan Loughran) comes into the tower and recognizes Dorothy right away; West wants to know again whether Dorothy is a good or bad witch. Dorothy says she didn’t kill her sister; West calls her a liar and wants to know what magic she used to kill her sister? Dorothy says to look in the bag, West removes the gun demanding to know what magic this is.

West puts the gun up to Dorothy’s head, saying she isn’t easily loved and pulls the trigger, nothing happens. West gets upset telling her lying wasn’t a good idea and she smashes Dorothy in the head with the butt of the gun.

King Ev (David Calder), Lady Ev (Stefanie Martini) and Jack (Gerran Howell) arrive at the house of The Wizard (Vincent D’Onofrio). Wizard tells them that when the two moon become one, the beast forever will return worse than ever before. He wants them to work together, with his expert knowledge and their technologies, they can build weapons so they can defeat it. Elizabeth (Roxy Sternberg) and Anna (Isabel Lucas) argue over who is right and wrong. Lady Ev confronts Wizard on having abundant counsel but mocks that they cannot agree.

West conjures up Glinda (Joely Richardson) and informs her she has their sister’s killer. Glinda tells her to wait for her arrival before they do anything. West belittles Tip and Tip says only those you truly love can hurt your feelings. West becomes more gentle with her, holds her hand lovingly.

Dorothy grabs broken glass with her foot and drags it towards her. Miranda (Amber Rose Revah) comes into the room and opens a hatch, Dorothy asks if there is a river under it, she tells her it is a sewer. Miranda asks her if she was thinking about a swim and crushes Dorothy’s foot onto the glass under it.

Sylvie wakes Lucas up and she tells him Dorothy is there, pointing to a picture on the glass window, revealing she knows it in her heart. Meanwhile, West goes back to see Dorothy and using her magic tosses her into the air. She informs her that Glinda is on her way and she wants to know the truth before she gets there. With every question she tortures her a little more, Dorothy reveals that she doesn’t know her own mother and West is surprised telling her that her mother killed 1000 children before she died and even she found the time to care for West.

Taunting her that her own mother couldn’t even care for one babygirl, that she must be rotten. Dorothy tells her to go to hell. She tosses Dorothy on the floor and both her hands show East’s gold and rubies. West attempts to grab them and they begin to burn her from within.

The Wizard talks with King Ev, all he asks for is his dog that passed away. The Wizard returns to Lady Ev demanding to know how long she has been ruling in her father’s place? She acts like she has no idea what he is talking about.

She admits she was too young for the last attacks, but she remembers that Wizard saved Emerald City but left their kingdom to drown, including her mother. Wizard offers her anything she wants. She wants to see Emerald City lay waste and for him to drown.

Dorothy struggles to open the sewer hatch and begs Tip to help her get to the Wizard before West comes back to kill her. Tip reveals that she was the boy they saved but Tip blames her for not knowing who she is now. Tip says her help was the worst thing that ever happened and she is just going to walk away. Miranda watches in the background, smirking at what she has learned.

Sylvie and Lucas arrive in town, Lucas asks Sylvie to lead the way to Dorothy. As Dorothy sits in the room, another woman is thrown in. Dorothy finds out it is her mother, Karen (Gina Bellman). Karen hugs Dorothy, telling her she got there the same way she did. She apologizes for not being there for her but if she just tells the witch what she needs to they can go home.

Dorothy has flashbacks to what happened and when she looks back, West is there instead and slaps her. West thanks her for the memories and leaves. Dorothy cries as Tip watches her through the door.

Lady Ev orders Jack to hurry up so they can to the festival, but he backs away asking her what she wants from him. She says he is her friend, he scoffs saying she doesn’t know what a friend is, that you don’t go out and get one, you have to earn one. She smiles at him and asks him about the festival.

Eamonn returns to the Wizard, they extract the bullet from him and Eamonn asks him if he knows what it is. Wizard doesn’t respond. Meanwhile, Tip grabs Dorothy’s bag, opens the room telling her she will not be responsible for another person dying. Miranda comes in the room with a knife, saying Mistress West will be pleased with her.

Glinda arrives at West’s harem asking about Dorothy. West reveals that Dorothy has secrets their sister died with. Glinda confirms that she doesn’t hide secrets from West since she is the only family she has left. West says Dorothy said all kinds of things implying Glinda is lying about when she saw East last. When they enter the room, they discover Dorothy have escaped. Glinda is furious West didn’t obey her.

West confronts Tip about lying, when Tip says she didn’t do anything West throws Miranda to the ground demanding to know if she helped the girl out of spite. Miranda insists she would never do that and tells her to look into Tip’s soul to see. West throws Miranda in the air, killing her shouting she cannot stand a liar! Miranda’s body falls beside Dorothy on the rocks.

Lady Ev denies to Jack that her father is sick. Jack wants to know why she wears a mask and she says she will tell him when they are friends. Together they enjoy the festival. Wizard comes to see Anna and hands her the bullet, telling her this is what will kill the beast forever and when that happens they will really have something to celebrate.

Dorothy steals a mast and wanders through the festival. Lucas and Sylvie are surrounded by Wizard’s guards. He orders Sylvie to run, but she just hides in the corner and watches Lucas take out all the guards. One of the guards tells him what happened, revealing he is the one who stabbed him before he went down, where Dorothy found him. Lucas crouches down, telling Sylvie he has done some bad things that he needs to answer for. He makes her promise to do no magic. She nods as the guard takes him away.

Jack and Lady Ev hold hands as they move away from the festival. A group of men surround them demanding to take Lady Ev’s mask. Jack tries to stop them, but they beat him as she commands them to stop. Jack uses his metal body parts to beat all the men up, once they are all on the ground he returns to Lady Ev who admits she isn’t afraid and they kiss; Jack pulls away and asks her not to do that. She offers to do something else.

West watches the drone video of the day her sister died, she storms off saying she has seen enough. Lucas is brought to Eamonn where he tells him he killed all those guards. Ojo finds West confronting her on her lie of releasing his wife. She storms off.

Dorothy asks him if he knows her mother Karen Chapman. He calls out her name, and says she has come home.