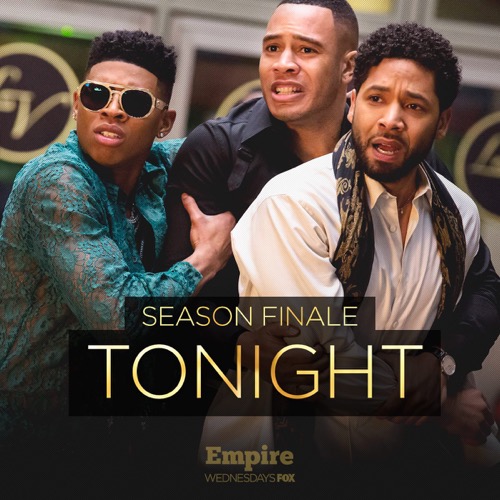 Tonight on FOX their blockbuster drama Empire airs with an all-new Wednesday, May 24, 2017, episode and we have your Empire recap below. On tonight’s Empire season 3 episode 18 “Conclusion. As Lucious gets ready to launch Empire Las Vegas with Giuliana at his side, Cookie pulls together her own team of allies to wreak havoc on the opening in the Season 3 finale.”

Tonight’s episode of Empire kicks off with Lucious and Giuliana landing in Las Vegas. Once they are away from the chopper, Lucious calls home. His mom begin ranting about putting steel in his enemy, Lucious tells her she is having another episode and hangs up. His mom gives the phone back to one of Lucious’ goons, and looks at Tariq’s dead body in the bath tub next to her.

Cookie is hanging out with Jamal, he wants her to come to his show but Cookie reminds him that Giuliana has had her black-listed. Jamal is going to take care of it, he wants Cookie to try to get Hakeem to come too.

Lucious’ mom calls Anika and tells her to come over to the house and get her stuff before she throws it away. Anika has her hands full babysitting Hakeem, he has an entire team of people gathered for a Bella search party. She tells Hakeem that she is sure Bella is safe, wherever she is.
Lucious and Giuliana meet with Charlotte at a casino to check out the venue for Inferno’s opening night and Jamal’s show. Charlotte rants about Tupac and Suge Knight’s brawl at the venue in the 90’s. She warns them that if there are any thug shenanigans, she will make sure Empire is blacklisted from Vegas forever.

Little do Cookie and Giuliana know, there are some major shenanigans transpiring. Andre meets up with Shine and they discuss their plot to take over Inferno’s party by force. Andre is determined to take Lucious out for good and he has hired someone to set off an explosion.

Cookie and Lucious sit Hakeem down and try to talk some sense into him. He’s going over the deep end worrying about Bella, they reassure him that they have someone looking for her and convince him to come down to Vegas.

Anika heads back to the house to pack up her stuff, Grace notices that she’s packing up Bella’s diapers and thinks that it’s odd.

Lucious and Giuliana return to the office to sign some papers to finalize the Inferno opening. Lucious takes Cookie aside and tells her that he got Giuliana to take her off the blacklist and she’s allowed to attend the party, but she’s to stay at Hakeem’s side and can’t be backstage. Cookie’s not thrilled, Lucious warns her not to act up because this opening is a big deal for the company. Hakeem barges

Hakeem barges in to the DuBois house where Angelo is standing there with his mother and Anika. The baby is in the backroom. Hakeem screams that he knew that she was playing him all along.

Andre slips in to Charlotte’s office for another hot and steamy hook-up. He reveals to her that he has been videotaping them, and he plans to extort her, then he laughs in her face and marches out.
Everyone files in to the venue for Jamal’s big night. Cookie has Shine and his men in position to make their move. Giuliana and Lucious catch Cookie back stage, and Giuliana rants to security to remove her. Lucious puts Giuliana in her place and informs her that Cookie is the woman that he loves and the mother of her kids, and it’s time for Giuliana to kick rocks. Giuliana is shocked – she reminds Lucious that she owns half of the club. Lucious corrects her, he played her, when he had Giuliana sign the papers at the office, she unknowingly signed the club over to him.

Cookie sits down with Lucious to enjoy Jamal’s show, which is all about Cookie and Lucious’ love story. Cookie slips away for a moment and calls Shine and tells him that the plan is off – he needs to get his guys out of there.

Cookie is shocked when Lucious reveals that he’s part of the show and he even wrote a song about her. Lucious heads up on stage to sing.

Hakeem arrives at the show, he tells his family that Anika found Bella and she’s fine. He shows them a picture of him holding the baby. Lucious is suspicious, he asks whose house the photo was taken at – Hakeem lies and says that it was taken at Anika’s mom’s house.

Lucious’ mom calls Anika late at night and says she has her mail that was at the house. Anika tells her the address of her hotel and to have it messengered over. Little does Anika know, she’s with the cops and Tariq’s dead body. The cops are holding an evidence bag with a letter opener in it that Anika used earlier to open her mail when she was at Lucious’ house.

The police arrive at the hotel and Anika is arrested for the murder of Tariq. She’s clearly shocked.

After the show, Cookie and Lucious run in to their old friend Barry from Philly. Barry introduces them to his wife, he reveals that his life is amazing, they are both doctors and they just retired – and they have a daughter together who is also a doctor. Now, they are just travelling and enjoying life together. Cookie and Lucious are affected by their run-in, and obviously jealous of their marriage.

Lucious gets down on one knee and asks Cookie to see the world with him. They sit down with their sons and tell them that they have news – they have decided to step down from the day to day operations at Empire, and it’s time for Hakeem, Jamal, and Andre to step up. Andre is shocked when Lucious hands him his office keys. Lucious gives an impressive speech about how much he loves Andre.

Andre races outside to tell Shine to call off the bomb. But, Shine refuses. He tells Andre that he started it and he’s going to finish it.

Andre runs to the front of the hotel where Lucious and Cookie and his brothers are getting in to a cab….the cab that has a bomb in it.

Lucious pushes Cookie to safety just as the bomb goes off, and he’s sent flying across the pavement.
Three months later – Lucious is in a coma, Cookie and the boys are keeping him company in his hospital room. The doctor comes in gets in to a fight with Cookie. Lucious miraculously opens his eyes…but he has no idea who they are and doesn’t recognize Cookie or the boys.