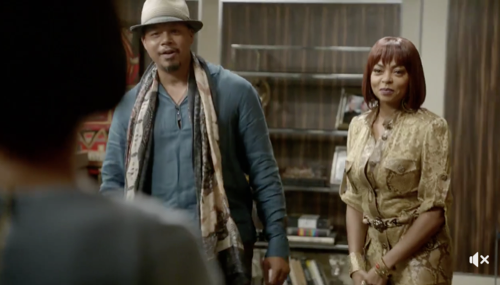 Tonight on FOX their blockbuster drama Empire airs with an all-new Wednesday, October 18, 2017, episode and we have your Empire recap below. On tonight’s Empire season 4 episode 4 “Cookie announces that the number one album for Empire’s 20-For-20 will be a competition between all of the label’s top artists, which gives Jamal a bold idea for his newest song. On the heels of Bella’s first birthday, the family plans a special “Prince and Princesses” themed birthday party, including a special Prince tribute, but the special day brings back haunting memories for one of the Lyons. Meanwhile, Lucious is at a crossroads, as he tries to put to rest the anger from his past life.”

Cookie and Lucious are sitting down talking about Cookie’s prison days. He wants to know everything. Cookie tells him about a fight she had with a woman named Poundcake. She recalls a time when Lucious came to visit and saw her injuries. He was mad.

As they continue to talk, Lucious remembers bringing Jamal to see her in prison. He sent Jamal in and didn’t go in himself. That was the last time he saw her in prison. Lucious is ashamed. He is upset that he wasn’t a better man. He wants to be a better man. Claudia arrives. She comes into the room and asks Lucious what she missed. Cookie’s face falls.

Lucious, Cookie, and Claudia show up at Empire. Everyone is excited. Lucious will watch Hakeem perform and then he is headed home. They all sit down in the studio. Hakeem performs. When he finishes, Cookie tells him to go eat. Cookie, Becky, Andre, and Lucious discuss the performance. Cookie isn’t happy. It isn’t alpha material. They need to figure out a game plan. Becky tells Lucious that she knows he will come up with something he always does. She recalls the time he saved the day when Diddy left them hanging. Andre cuts her off. They don’t want anyone to know Lucious has lost his long-term memory.

Cookie comes out of the studio to visit all of the performers. She wants them to compete to be the alpha. She announces that she wants to see them perform. Jamal isn’t happy. He leaves. Lucious, Cookie, and Becky take a seat and call the performers one by one to show them what they have. Tory shows up. Cookie tells her no. A white girl can’t be the alpha of the label.

They listen to person after person. Cookie is cutthroat as she dismisses them. Lucious tells her she is being cruel. He doesn’t think it is needed. Cookie tells him she is being him. Maybe he should go home.

Jamal and Tory are talking. Jamal thinks Warren is the one. Meanwhile, Andre is sitting in his office drinking. Lucious comes walking in. He tells him that he and Cookie are bumping heads.

Anika comes to the studio with the baby. She comes to see Cookie and Lucious. Andre sees her. He is angry. He lunges at her, but Cookie and Lucious hold him back. He tells Lucious that his girlfriend is dead because of her and because their family keeps secrets to protect themselves.

The next day, Jamal wants to sing with Warren in front of Cookie and the others. Cookie tells him to hurry up she is on a deadline. After they sing, Cookie and Becky go crazy. Jamal is the alpha!

Hakeem and the others throw his daughter Bella a birthday party. Hakeem performs Prince. Everyone celebrates.

Lucious is having flashbacks that upset him. Claudia comes in and consoles him. He is at a crossroads. She wants to help him pick his path.

Andre runs into the detective. He grabs her hand and tells her “let’s go.” They head off to be alone.

Angelo shows up at Bella’s party as Anika’s attorney. He is suing on Anika’s behalf for full custody of Bella.

Claudia brings Lucious to the lion statues where he changed from Dwight to Lucious. He tells her that he does want to choose another path. He asks Claudia to go with him. She says yeas.