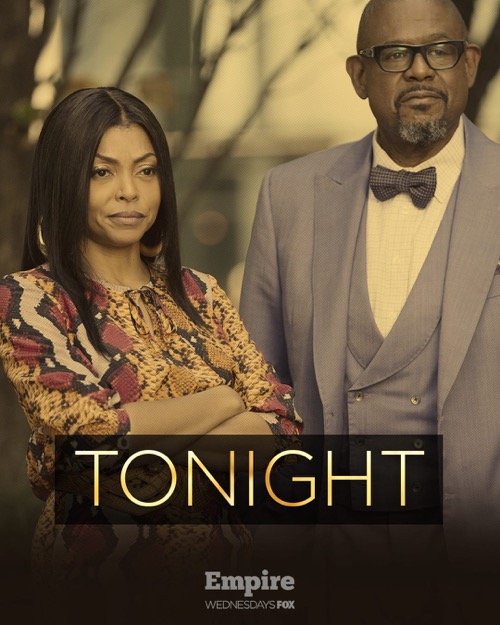 Tonight on FOX their blockbuster drama Empire airs with an all-new Wednesday, November 29, 2017, episode and we have your Empire recap below. On tonight’s Empire season 4 episode 7 “The Lady Doth Protest,” as per the FOX synopsis, “Production comes to a halt on Empire’s 20-For-20 when Calvin and Portia, feeling overworked by their new producer, Eddie Barker, call for a strike, leaving Cookie to find a solution to the issue. In an attempt to prove that he can still be the man he was before the explosion, Lucious arranges a deal on Hakeem’s behalf. Meanwhile, Jamal and Andre express their feelings for their significant others.”

Lucious and Jamal are experimenting with music and paints in the studio. Lucious begins playing the piano. Jamal smiles wide – his father is back.

Hakeem watches Anika, Angelo, and Bella from the bushes in the park. A stranger compliments Anika and Angelo on their daughter’s eyes. Hakeem loses it and starts to walk towards them. Thirsty comes out of nowhere and tells him to stay away.

Eddy, Becky, Porsha, and the others oversee Tory in the studio. They all begin to disagree on the sound. Becky points out that they are all just tired.

Anika answers her door. It’s Lucious. He has come to talk to her. She tries to shut the door but he holds it. She lets him in. Lucious tells her that if she agrees to joint custody he will make Bella an heir to Empire along with the boys.

Porsha comes in to see Cookie. She wants her to address the turmoil with the engineers. They are thinking about going on strike. Lucious comes in. Cookie dismisses Porsha. Lucious adds his thoughts. Cookie reminds him that she is running the show. Lucious tells her that he always has her back. Cookie recalls differently, thinking back to prison when she was served divorce papers by him.

Andre is in his office having a drink. He tries to call Pamela again to apologize for their fight. She doesn’t pick up.

Andre is in the lobby of Empire when he sees the news. Pamela has been shot.

Cookie tries to talk the engineers out of going on strike. Eddy gets involved. He tells them to go on strike if they want. He tells Cookie not to cater to them. Porsha starts to walk. Cookie is mad. How dare she walk with her boyfriend Calvin? Porsha sets her straight. She works day and night without a thank-you.

Warren apologizes to the guy and then tells him to head out. He says sorry to Jamal and explains to him that he has to tell him something.

Pamela shows up at Andre’s. He has been a wreck he explains. She doesn’t want to talk about it. He does. He wants to lay their cards all out on the table. He cares about her. She tells him she was shot at by a man multiple times. She shot back and she planted a gun on the man. She just told him something that could put her in a cell for life. She trusts him.

Lucious comes into the studio to talk to the musicians about his plans for his music. They all get up and leave. One of them apologizes – “sorry, we are going on strike,” one of them shares. Eddy comes in and tells Lucious to keep his head up. It happens to a lot of companies.

Porsha stands outside Empire and leads the crowd to chant. Shyne joins them. Cookie watches on from a distance in disapproval. Eddy comes to see Cookie. He and Lucious have a plan. They are going to bring in some temp workers. Cookie disagrees. These people are her family and she plans to show them what they all have in common. She calls everyone to the conference room.

She tells them all that they are family. She tells them the story of when she was in prison and she helped her enemy who became pregnant. They may have all been in prison and fought a lot but they only had each other. Cookie explains to them all how much they mean to one another and to Empire. The strike is over!

Andre meets up with Cookie, Lucious, Hakeem, and Jamal to see Bella. They come into the restaurant to see Warren with Diana. Jamal finally finds out that Diana is Warren’s aunt. Jamal punches Warren. They fight.