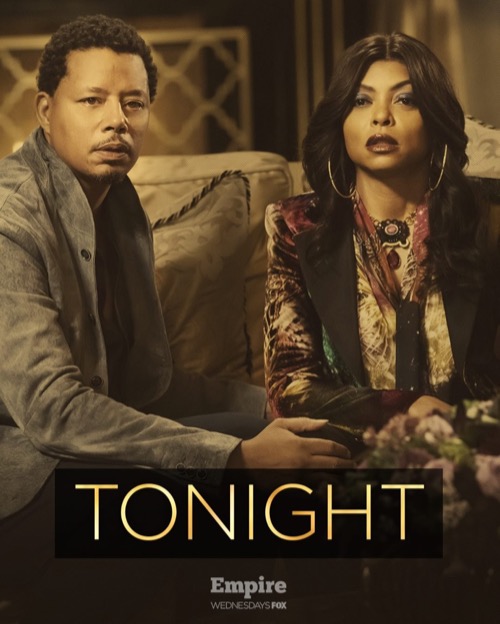 Tonight on FOX their blockbuster drama Empire airs with an all-new Wednesday, December 6, 2017, episode and we have your Empire recap below. On tonight’s Empire season 4 episode 8 “Cupid Painted Blind” as per the FOX synopsis, “Cookie and Lucious take matters into their own hands as they watch Diana DuBois’ master scheme unfold. Meanwhile, Andre begins to spiral out of control, wondering what she could have in store for him. Also, Jamal’s sobriety is put to the test; and Shine gives Hakeem advice on how to maintain a balance between his work and personal life.”

Thirsty informs Jamal, Cookie, and Lucious that Jamal has a warrant out for his arrest after he attacked Warren. Thirsty leaves while Andre and Hakeem arrive. Cookie offers to find Jamal something to eat. Jamal tells them all he knows what is going on. They think he has fallen off the wagon. He hasn’t. Cookie tells them that they are all there for Andre. He needs to be ready because he has to be next on Diana’s list.

Angelo is sitting with Warren, who is resting after being beaten up by Jamal. Angelo reminds him that he warned him about falling in love with a Lyon.

Andre tells the family that he isn’t next. Diana cannot get at him. There are no connections. Lucious asks him about his new love. Andre is certain he is safe. He and Hakeem are all done talking. They leave. Jamal tells Cookie and Lucious they should be on their way too.

Cookie has a flashback to the time she helped Pound Cake in prison. Pound Cake was in pain as Cookie walked her down the hall. Time passes, Cookie recalls meeting Pound Cake’s baby girl right after birth. Pound Cake cries. She doesn’t want to give her baby up. She would do anything for her. All the women agree.

Outside of Jamal’s, Cookie gets upset with Lucious. She doesn’t feel like he is there completely and is ready to fight for their family. He assures her he is. He knows Andre isn’t being honest with them. They split up to watch their boys.

Cookie finds Diana on the street. Diana has security with her. Cookie only wants to return something. It is a ring. Cookie throws it in the street and then runs. Thirsty takes pictures while Diana yells to her men to go get the ring as traffic swerves around them.

Shyne is in the studio with Tiana. Hakeem comes in to see Shyne. He wants Hakeem to help with the recording. Tiana comes in. Hakeem doesn’t want to help her and she needs autotune. She slaps him across the face and leaves. Hakeem gets angry. Shyne wants to take him somewhere.

Thirsty updates Lucious on Diana. Meanwhile, Andre meets up with Pam at a busy outside café. He accuses her of being associated with Diana. She has no idea what he is talking about. She offered up her biggest secrets to him and he thinks she is working to help Diana. She gets upset and stands up to leave. Andre begs her to stay, grabbing her arm. She pulls away from him and takes off. He smashes a glass angry. Thirsty watches from a distance behind a bush. He calls Lucious and tells him to come.

Lucious arrives to see Andre who pretends everything is all right. He is just there at the café having a coffee, he tells his father. Thirsty comes up from behind Lucious, who tells Andre that he was just seen flipping out. Andre admits that he has met someone. He tells Lucious about Pamela. Andre gets upset talking about it. He gets up and leaves. Meanwhile, Jamal is having a hard time dealing with his break-up with Warren. He takes a bottle of wine out and some pills.

Shyne brings Hakeem to his house. Shyne’s children are there all playing, as well as his ex-girlfriends. He explains that they are all drama free.

Jamal sits in the kitchen, having flashbacks of he and Warren’s special moments. He throws the bottle of pills but takes a sip out of the bottle.

Cookie lets herself into Warren’s. She comes into his bedroom with a gun pointed at him from the door. He sits up in bed and winces. She tells him they are going to have a little talk.

Cookie tells Warren he is going to go to the precinct and tell them he threw the first punch. Warren agrees. He just wants Cookie to tell Jamal he is sorry. Cookie demands that he tell her what Diana is going to do to Andre.

At home, Lucious and Cookie inform Andre what she learned from Warren. It seems Andre’s shrink is a good friend of Diana’s, the one who prescribed him meds that made him feel funny. Cookie demands he find a new doctor. Andre agrees and tells them he needs to go talk to Pam.

Cookie has a flashback to prison. She confronts the guard who got Pound Cake pregnant. She wants to know where she and the baby are. He sends her to solitary. Weeks later, Cookie finally sees Pound Cake, who just got out of solitary. She is quiet and crying. They made her sign over her parental rights.

Hakeem shows up to Jamal’s with a bag of candy. He has been smoking and Jamal has been drinking. The two start singing and recording.

Andre tries to call Pamela again. He leaves her a message. He hears a knock at the door. It is Pamela. He tells her that this whole thing is a misunderstanding. His doctor, who isn’t his doctor anymore, he tries to explain. She cuts him off. He accused her of lying and colluding, but she is dealing with something worse. She killed someone and she has to live with that. He doesn’t understand. He explains that he does know and he can tell her how.

Thirsty arrives at Lucious and Cookie’s. There isn’t anyone named Pamela at the precinct. They try to call Andre but he doesn’t pick up.

Andre confesses to Pamela about his father, the car bombing, everything. She tells him – “I got you.” She isn’t a cop she is undercover with Metro. She begins to try and arrest him and draws her gun. He goes crazy. They fight. He gets her on the ground and chokes her in a fit of rage. Her eyes close. He realizes what he has done. He screams.

Lucious and Cookie arrive. Andre tells them what he has done. They look around. There is no body. Andre is hallucinating. He imagined the whole thing. There is no Pamela. Andre falls to the ground and cries. Cookie tells him it is going to be all right.