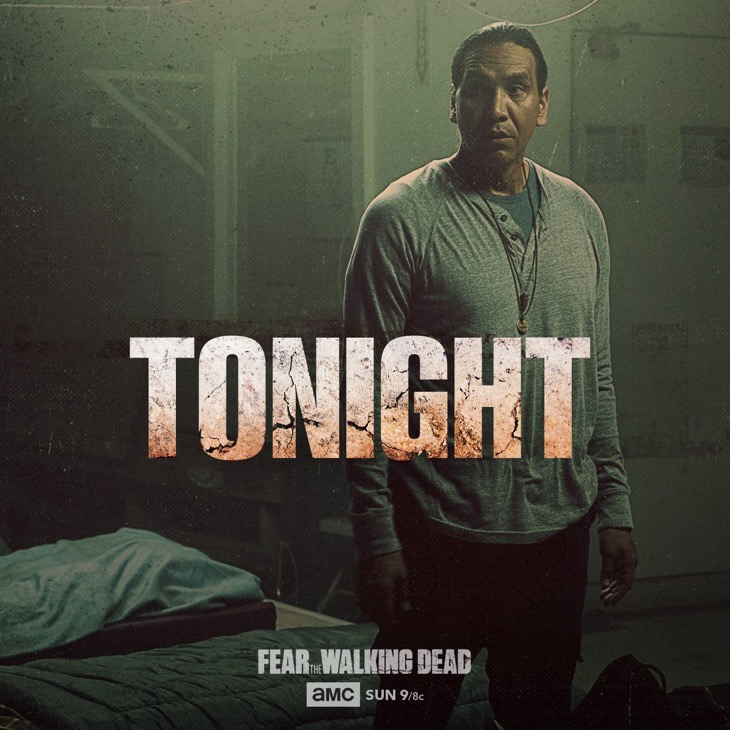 On AMC tonight Fear The Walking Dead (FTWD) airs with an all-new Sunday, September 17, 2017, episode and we have your Fear The Walking Dead Recap below! On tonight’s FTWD season 3 episode 11 called, “La Serpiente” as per the AMC synopsis,  “Following the rekindling of an old friendship, a mission is launched to replenish the Ranch’s water supply by seeking the help of another community.

Can you believe FTWD Season 3 is half way over? Don’t forget to bookmark this spot and come back later for our Fear The Walking Dead recap between 9 PM – 10 PM ET.  While you wait for the recap, don’t forget to check out all our FWTD news, spoilers & more, right here!

In front of them, the road is blocked with the infected and cars; Victor throws something that beeps, causing the infected to move towards it as Walker drives the tanker through the broken down cars; Victor helps opens the gate allowing the truck through and quickly locks it up to prevent the infected from getting in. Madison encourages Victor to find whatever he is looking for quickly, they push a car from the junkyard aside and go into a grate that will lead them to the dam; Victor jokes about them holding their breath in the descent.

Walker doesn’t trust him and doesn’t want to follow him but Madison says she is going to because whether they trust him or not, they need the water! Victor tells them to be quiet as the infected walk above them, but it appears they hear them anyways. Walker insists that Strand is lost but Madison says he knows where he is going and they continue to follow him; unfortunately he leads them right to some walkers.

Madison feels she can take them, but he thinks there could be more in the dark; again, Victor seems lost and Walker walks away and Victor finally admits he is lost and reveals to Madison that Daniel Salazar (Ruben Blades), and he is angrier than ever, saying he used Ofelia (Mercedes Mason) as bait.

She informs him that Ofelia is alive and at the ranch, Victor breaths a huge sigh of relief and suddenly he finds the eye he is looking for. Walker rushes towards them saying they are coming. Victor finds the tunnel to the dam and the other to the streets; Walker wants to go to the streets but Madison says there is no time and they go towards the dam.

As they crawl through the feces and human waste, they realize something is behind them and it doesn’t sound like its outside, Madison drops her flashlight and when she picks it up, there is an infected in front of her, Walker passes her the hatchet and she kills it, saying they need to remove the body to keep going, she hacks it apart so they can go by, beginning with the head. She screams for him to stop as all the disgusting liquid behind it begins to rush towards them.

Daniel, Efrain (Jesse Borrego) and one of their wounded men, Everado, race off with their water tanker after the people grow angry, demanding them to leave the water behind, even shooting at the truck. Daniel begins shooting back at them and Efrain shouts at him to stop; Daniel says they were not defending themselves but in fact starting a riot; Efrain warns him that Lola Guerrero (Lisandra Tena) will know the truth.

Suddenly, Daniel orders the truck to hurry as he notices someone in the brush. Daniel shoots and its Victor. Madison begs him to stop, when he sees its Victor; she tells him Ofelia is alive and he puts down his gun but asks how he can believe her when she’s with Victor. She tells him Walker saved her, but the ranch is in trouble and they need water.

Daniel escorts them to the dam but says he must speak to Lola first; they go to the dam to see all the water and listen as Daniel argues with Efrain and Lola. Madison says she will handle the negotiations and promises Daniel will help them.

As Daniel sits in his room, Lola comes to see him. Daniel confirms that Madison has never lied to him, and his daughter is with them at their camp. Lola says she understands if he plans to leave, but he must tell her now. He says Ofelia is safe, but she is not and he made a promise he is going to fulfill. His daughter thinks he is dead and maybe that is for the best.

Victor and Walker are stuck sharing a room at the dam before they are told to leave in the morning. Walker tells him what is happening at the ranch and that Madison gave up the deal for water because of Victor and at the ranch there are two sides and as the water gets lower, his side will come first; Victor worries about Madison and her children and Walker says he hopes she doesn’t regret her decision when they are back in the desert.

Madison reminds her sometimes a leader needs to show force to gain respect. Madison tells her about her children and she needs to save them. Lola says she is trying to save her children but she is trying to save her city. She suggest Madison bring her children and Ofelia there and she will help them; saying they will be safe as long as she is in charge. Madison tells her its not rare for a leader to do right by everyone, its impossible.

Efrain is tending to Everado’s wound when Victor arrives and offers assistance. Victor reminds him that they should never bite the hand that feeds them. Everado begins to speak but Efrain tells him that Daniel calls him “la serpeinte” and cannot be trusted.

Efrain says he is a man of the people, he helps them and never harms; there are many desperate souls. Victor taunts him a little bit and Efrain said Daniel had no right to shoot at the people, they are thirsty and scared and Daniel is paranoid, Victor reminds him that descent bring revolt. Efrain wants the flood gates to be opened and down the river to the people, then the rains will come again and this is too much power for one person.

Daniel meets with Walker in the dining area. He appreciates what Walker did for Ofelia who says Daniel raised a brave woman, telling Daniel she walks with him as a soldier and is a hero to them. Daniel disapproves saying he didn’t raise a soldier as Walker tells him what she did to an enemy camp. Daniel hates that she saved a lot of lives by taking the lives of others.
Madison is stressed about everything falling apart; Victor says maybe they aren’t meant to stay at the ranch. Victor says the place is safe, but Madison says it would be if Lola would defend it; but admires that Lola isn’t willing to sacrifice herself for bad things. Victor reminds her that she has always done what’s best for her kids; he asks her to remove the kids from the picture for the moment and asks her what she would want.

She talks about the 80s when she had a crazy perm and wanted tickets to see Cheap Trick; but then says she feels the ranch is the closest thing to normal she has found. Victor says the one thing he wants is to not fail his friends.

Lola shows Daniel on the map a place they haven’t gone to in weeks with water and he reminds her they were attacked the last time they went there. She tells him its time, they need to go back so the people don’t feel the need to attack; she reprimands him for shooting back at the people. She scoffs that he wants her to become a killer, like Dante and him! He says he has killed for her, to save her soul. Lola says because of his actions, she is going on the water run today, he suggest if they fear him it is a good thing. She tells him to leave if he doesn’t do what she believes in but if she stays then he must follow what she wants.

Daniel sees Victor watching the men load the water truck. He says he doesn’t know what is circling in that serpent brain of his; and whatever it is, if it benefits both of them, he will look the other way; if not, he will have him in his sights. Daniel begins to sing “Down with the Water Queen.”

Walker is furious that Madison doesn’t honor her word and says the ranchers must leave. She says there is another way and they are too close. Walker says they can leave peacefully or forcefully, she is upset saying they will not survive out there again.
Daniel tells Madison that he couldn’t convince Lola who thinks she is the only one who knows what the dam needs. He says Lola saved his life and he cannot abandon her; Madison confronts him about being afraid to face his daughter. Daniel says Lola is in danger and if he leaves the dam will fall within days. He says Ofelia will always be his daughter, no matter what Walker had her do.

Madison is walking towards the truck and Victor stops her just before the truck explodes and the infected walk into the dam area. Madison, Victor, Lola and Daniel approach the infected and work together to kill the dead. Daniel says this is no accident as now the living will come after them too. The people are shouting “Down with the water queen” telling them the next attack will be worse. Lola calls for Madison and Walker to join her in her office.

Efrain warns her that violence isn’t the answer when she asks Daniel to write down how many weapons and ammo they need. Madison says they can provide it but they need 10,000 gallons of water a week until the rains come and a tanker to bring back today as a show of good faith. Madison tells them about the trading post and Lola orders that Ofelia be at the trade.

Daniel escorts Madison and Victor to the truck, Madison thanks Daniel who warns her to be careful that a friendly face will slip a knife in the back when the eye is turned. Victor and Daniel shake hands as Daniel tells him it isn’t goodbye, he expects to see him in 5 days with his daughter.

On the road, Madison asks how Victor did it, telling him to cut his crap and he says he rigged the truck to make it happen. She thanks him and admits she might not have done for him what he just did for her and he just laughs. Along the way, Madison stops beside Walker asking if he is thirsty and they continue down the road.