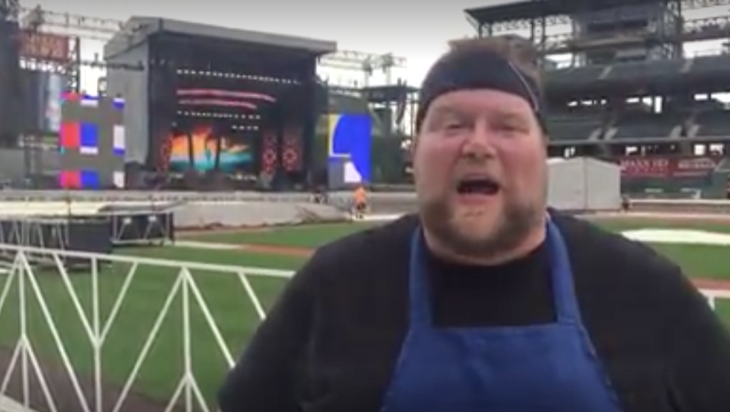 So make sure to tune in tonight between 9 PM – 10 PM ET for our Food Network Star recap below.  While you wait for our recap make sure to check out all our television news, spoilers, pics, videos & more, right here!

The Final Four contestants are welcomed back to the kitchen by Giada. Today the show will hit the road and each contact will visit a food truck and report back. Rusty is assigned the truck that specializes in fish tacos. Matthew will visit the truck that specializes in Hawaiian cuisine. Amy is not sure if she is excited or not when Giada gives her the Italian food truck and Jason is given the grilled cheese truck. Bobby introduces Sabin Lomac who will be the guest judge for the night.

Each contestant goes to their food truck and meets the owner and learns about their specialty foods. The contestants must find a dish that speaks to them and then present it to the judges in a two-minute live segment. Matthew is the first up and does a wonderful job. The judges are impressed with his performance. Rusty is up next and the judges laugh that it was kind of like a home invasion. Rusty yelled at the food truck owner and never allowed him to speak. The judges love in Rusty in general but all agree he was too aggressive in this segment.

Jason goes live from the grilled cheese truck. He didn’t plan well. The dish he highlights takes over two minutes to cook and he only has two minutes for his whole presentation. Jason runs out of time and the judges agree this is the least interesting thing he has done in the competition so far. Amy is the last to present and did a great job. The judges agree that she made it fun for the audience. The performances are judged by the ability of the contestants to connect and present in a live situation. Matthew is declared the winner and will have an advantage in the next competition.

The contestants return to the kitchen and find that it has been transformed into a football watching heaven. The remaining four contestants will have to change up a classic game day food dish into something new and different. The contestants will be working together to present a game day show where each will have one minute to present the dish they have prepared. The first presenter will also introduce the show and the last will pull everything together as the show ends. Amy is assigned Nacho Sliders, Matthew is assigned Pizza Wings, Rusty gets Loaded Potato Hot Dogs and Jason is assigned Chili Deviled Eggs.

Amy can’t find any tortilla chips in the pantry so she decides not to include any in her hamburger slider. She doesn’t have time to make any but the other contestants think it is a bad decision since you can’t have nachos without chips. Matthew works to make sure his filling has good flavors since he struggles with this in the challenge last week. Rusty turns his back for a moment and his hot dogs catch fire. He has only five minutes left and has to start a new batch. Jason is in a huge hurry and has a hard time getting his hard boiled eggs de-shelled.

Now it is on to the television show presentation. Since it is an ensemble show all of the contestants need to be involved in the presentations even if they are not the one be highlighted. They are all nervous and hope it goes well. Two guest judges join Bobby and Giada to judges this portion of the show, Jemele Hill who is the host of ESPN’S SC6 and Jaymee SIre of Iron Food Chef. Jason is the first to present and while he starts strong he doesn’t include the other contestants in his presentation and has to cut his two eggs into four parts so everyone can get a taste. The judges think he ruined his presentation with that move. Jemele and Jaymee loved his intro and thought her brought the viewer in and kept them engaged. His likeability and charm was there but he really just ignored the other contestants. His egg tastes very good.
Matthew knocks it out of the park.

Not only does he do a great job with his buffalo chicken pizza pockets but he also offers a great idea for a popcorn side dish that was thrown at him in the last minute. The judges loved his introduction of his dish and his ability to include his fellow contestants. His dish however was not as good as some of the other things he has cooked in the past. However, his very strong performance makes up for the taste of his food. Rusty starts out with a negative my complaining that he got stuck with potato and hot dogs. He then does a very poor job of talking about his game day fail dish. All and all Rusty’s presentation is a fail. The judges criticize his mispronunciation of a word and his negativity. Rusty’s food does taste good.

Amy is the last to present and her energy is very low and she starts to repeat herself. The judges are not impresses. Besides not presenting her food well she also did not do a very good job of closing the presentation out. Her food tastes very good but the judges notice that Amy did not use chips. At this late in the game you have to have a great presentation and great food. Jason and Matthew are in top performers of the night and are safe for another week. Rusty and Amy are at the bottom. One of them will be going home. Both struggled in both their presentation and the taste of their food. Amy is sent home.
THE END