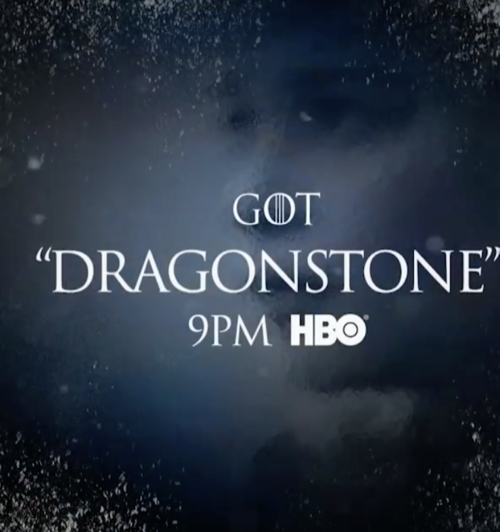 Tonight on HBO, Game of Thrones is back with an all-new Sunday, July 17 season 7 episode 1 called “Dragonstone,” and we’ve got your Game of Thrones recap down below! On this evening’s episode as per the HBO synopsis, “In the Season 7 premiere, Jon (Kit Harington) organizes the defense of the North; Cersei seeks to even the odds and Daenerys comes home.”

Walder tells his men that they are there to hear plans now that winter has come. He gives a toast. All the men drink their wine. He gives cheers to all who helped him get the Starks at the Red Wedding. They didn’t get all of them though, he announces. The men begin to cough and drop to the ground. They are dying. Walder pulls his mask off – it’s Arya. She tells the young girl to her left at the table to remember the north. She leaves the room with a smile.

The wind howls across the landscape. Darl clouds begin to emerge. Men on horses with weapons walk.  It’s the dead.

Bran and Meera arrive at icy gates. Men open the gates. Meera introduces them. How do they know these two are who they say they are. Bran warns of the Army of the Dead. The men bring them in.

Jon speaks to the people of his plans. He wants all of the men and woman to prepare. They need to use all of the castles for the war. Sansa wants the trader families to be taken out of their homes. Jon disagrees. You can’t punish the families for their sons. Jon announces that his decision is final. Jon calls Ned and Alys up. He wants them to pledge their loyalties to the House of Stark. They accept.

Jon speaks to Sansa as they walk alone. He tells her not to question his decisions. She agrees. She thinks he is good at ruling. He chuckles. She tells him to stop trying to protect her. He asks her not to undermine him. A message has been sent from the King’s Landing. The message is from Cersei. It’s a warning. Sansa re-confirms the warning. Cersei will not stop until she gets her way.

Cersei watches a man paint a map. Jamie comes to see her. She asks him if he is angry, he has been ignoring her, avoiding. He tells her he is not. She tells him that Tyrion is acting as counsel to Daenerys. They need to do something. She warns him of Sansa and Jon. Jaimie tells her that she doesn’t realize the danger they are in.  He wants to talk about Tommen. She does not. He betrayed them. Jamie reminds her that they don’t have allies. They need them, they can’t win this war. She has a plan, she has invited the Greyjoys. Jamie calls them bitter people who can’t do anything well.

Cersei sits on her throne, listening to Euron. He wants to join them as allies. Jamie is hesitant. Cersei wants to know what he wants in return. He proposes marriage to her. He has a 1,000 ships and 2 hands. She turns him down.

Tarly cleans bedpans, gagging and returns books to their shelves. He looks ahead, through a gate at guarded books. Later, he asks a Maester for access. He tells him he has seen the Army of the Dead. The man believes him. But he cannot have access. It is night, Tarly steals the keys to the restricted area.

Baelish talks to Sansa as they watch soldiers practice fighting. He wants to give her happiness. She wants peace and quiet.

Arya rides through the woods on horse. She hears men signing. She watches as she rides by slowly. She tells them that they are singing a pretty song. They offer her rabbit. She stops and gets off her horse. They ask where she is headed. King’s Landing they tell her. They warn that it is a rough place. They are in the Riverlands to keep the peace. They offer her food first. They tell her that they have endless adventures. Now they just want to go home. They offer her blackberry wine. They want to know why she is headed to King’s Landing. She tells them that she is going to kill the queen. They go silent and then laugh. She laughs with them.

Clegane and the men ride in the snow on horseback. They see a small house. The men want to stop for the night. Clegane doesn’t think it is a good idea. They stop anyways and go inside to see two dead bodies, a father and his daughter. They start a fire. Thoros urges Clegane to look into the fire. He sees a wall of ice. It’s where the wall meets the sea. There is a castle there, the dead are marching past.

Thoros wakes that night to digging. He goes outside. Clegane is burying the dead. Thoros asks him if he knew these people. Clegane tells him not really. Thoros grans a shovel and helps. Clegane tries to say a prayer but he can’t remember the rest.

Tarly is reading. He is falling asleep. He looks through the book. He finds a map of Dragonstone. He needs to tell Jon. The next day, he collects dishes. A man reaches out and and startles Tarly, He asks him if the Dragon Queen has come yet.

Daenerys sees a castle from the ship. She smiles. They make it to land. She gets out. She touches the sand. The others follow behind her. They walk up to the castle. Her men open the doors. She walks in with the others behind her. They travel a narrow walkway to the castle.  They go inside. She sees the throne and a large table with a map. Tyrion looks at the walls of dragon designs. She asks him – shall we begin?