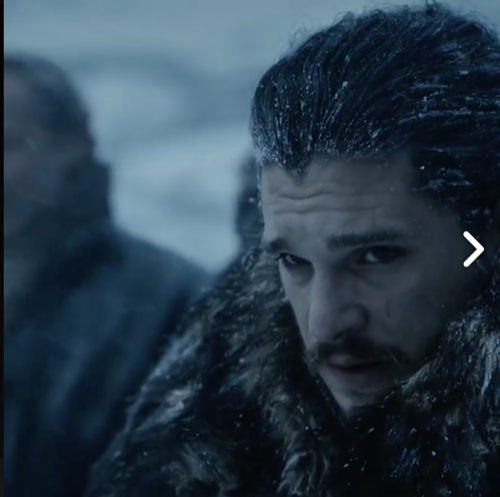 Tonight on HBO, Game of Thrones is back with an all-new Sunday, August 20, season 7 episode 6 called “Death Is the Enemy,” and we’ve got your Game of Thrones recap down below! On this evening’s episode as per the HBO synopsis, “Jon’s mission continues north of the wall, but the odds against his ragged band of misfits may be greater than he imagined.”

The wind is howling as Jon and the others make their way through the wintery landscape. Gendry has never seen snow before. Tormund and Jon walk ahead of Gendry discussing whether he is a fighter or not. Gendry is angry with Beric for selling him off like a slave. Sandor tells him to quit his bitching. Jorah and Jon talk about Jon’s father. Jorah admits that Jon’s father wanted to execute him; he was in the right of course. Jon returns a sword that Jorah’s father had given him. Jon wants him to have it. It doesn’t belong to him, but Jorah won’t take it. He brought shame to his father.

Arya watches down on the grounds as it snows. Sansa approaches. Arya remembers when their father used to watch them from here.  When she was younger she used to practice shooting. When she finally hit a bulls eye, her father clapped. Arya confronts Sansa about the scroll she found. How could she betray her family. Arya would never betray her entire family. Sansa wants credit for Winterfell. They have it back because of her. Sansa tells Arya that she would never have survived what she went through. Sansa wants to know what she plans to do with the letter. Arya tells her that she knows she is scared.

Tormund teases Sandor. Was he pushed into the fire when he was a baby? Sandor tells him to fuck off. Tormund taunts him as they walk while Tormund tells him he has a beauty waiting at home. Sandor realizes he is talking about Brienne.

Beric tells Jon that he has been brought back from the dead 6 times. He tells Jon that he is fighting for life. Death is the first and last enemy. They can defend those that can’t defend themselves. Sandor stops walking. The mountain up ahead is what he saw in the fire. They are getting close.

Daenerys tells Tyrion that she likes that he isn’t a hero. Heroes do stupid things and they die. She lists off the men she knows, naming Jon. Tyrion tells her that Jon looks at her longingly. She disagrees. But if he does like her, he is too little for her. She apologizes to Tyrion. He isn’t too little. She wouldn’t pick a coward for her hand. Tyrion talks to Daenerys about sitting down with the enemy and how she needs to keep her cool. He wants her to see it from her enemy’s side and now what is coming down the road. She doesn’t have children. He wants to discuss her succession. She does not. After she wears the crown they can talk.

The men travel towards the mountain as visibility gets worse from the snow. They see something ahead. It has blue eyes. It runs at them, but takes out one of them. They form a circle. It attacks Thoros. Sandor watches in shock. The others jump in. They attack the bear. He runs off. They drag Thoros to safety. They open his top. He is bleeding. He wants the flask. He drinks and tells them to go on.

Sansa and Littlefinger meet in private. She wants to know how Arya got the scroll. If the men find out they will all leave. Littlefinger tells her that they all respect her. She doesn’t believe that. By the time Jon comes back he won’t have an army left, Sansa thinks. Littlefinger thinks that maybe Brienne could help. She swore to protect both of the girls. She would intercede if Arya was going to hurt Sansa. She would, Sansa agrees.

Jorah and Thoros are walking. Jorah tells him he was brave, waving that sword. Tormund and Jon hear something below. They peak down and see a small army. Where are the rest of them? Jon and the others pounce on them. They take out the small army, but one of them won’t stop screeching, alerting the others. They send Gendry running to go and tell Daenerys to send help.

The men run across ice. It begins to crack. They stay still. The army is behind them. Swarms of men run after them. Jon runs as fast as he can. The ice cracks. Dozens fall in. Meanwhile, Gendry continues to run by himself. He has a ways to go. Jon and the others sit atop a small rock in the middle of the lake as they watch the circle of enemies at a standstill around them.

Gendry falls down. A gate rumbles. The men come out to see him. He tells them to send a raven.

It is morning. Jon and the others are still sitting. Freezing and tired, they keep watch. Beric checks on Thoros. He has died. They cover him. Beric says a prayer. Jon tells them they need to burn his body.  The white walker they hold captive, screeches. They need to take him back. Jon tells him that Daenerys is their only hope. Beric spots the Night King on a horse. He wants to kill him. The others are hesitant.

Sansa receives an invitation to King’s Landing. She tells Brienne. Sansa does not want to go. She wants Brienne to go. But Brienne doesn’t want to leave her alone with Littlefinger. Sansa tells her that she does not need her protection.

The dragons snarl. Daenerys is getting ready to leave. Tyrion tells her not to. He wants her to do nothing. If she dies they are all lost.  She gets on her dragon and leaves. The other dragons follow.

Sandor throws a rock across the frozen water. He slides in front of one of the dead. It begins to walk. The others follow. They all get ready with swords drawn. They fight. The others begin walking to join the fight. Jorah holds his own and saves Jon too. Jon yells fall back, but Tormund can’t seem to get away. Sandor steps in, helping to fight the men off of him. One of the men falls backwards and over a ledge. The walkers rip him apart while Jon watches helpless.

Fire comes out of the sky. The dragons have come. They breathe down fire on the dead. Daenerys lands her dragon and gestures to Jon to get on. A walker approaches. He stops to kill them off. The others get on the dragon. The Night King sends a large stake into the air, killing one of the dragons. The dragon gushes blood and falls into the frozen water.

Jon watches with sadness. He sees the Night King has another stake at the ready. Jon yells to Daenerys to go as he runs forward but is taken out. He breaks through the water, falling in. Daenerys and the others take off. Jon pops up seconds later, gasping for air. He gets up and walks to the side. Some of the dead watch him. They begin to run. He is ready with his sword. A man on horse comes out of nowhere. It’s his Uncle Benjen. He puts Jon on the horse and sends him on his way. He stays behind and fights.

Daenerys watches from a snowy tower. Jorah tells her it is time to go soon. A little longer she says. A horse comes into sight. It’s Jon. He is taken in and tended to. Daenerys watches him as they set him in bed.

Jon awakes to Daenerys. He apologizes. Daenerys cries. He wishes he could take it back. He wishes he would have never gone. Daenerys doesn’t wish that. Now she knows. She is going to destroy the Night King and his army. They will do it together. He refers to her as his queen. He would bend the knee but he can’t right now She squeezes his hand. She hopes she deserves it. He tells her she does. She tells him to get some rest.