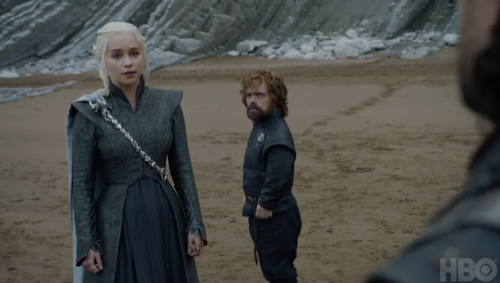 Tonight on HBO, Game of Thrones is back with an all-new Sunday, August  6  season 7 episode 4 called “The Spoils of War,” and we’ve got your Game of Thrones recap down below! On this evening’s episode as per the HBO synopsis, “Daenerys fights back. Jaime faces an unexpected situation. Arya comes home.”

Ser Bronn is complaining that he didn’t get enough gold for taking the castle with Jamie who is in a bad mood. Bronn teases him but he doesn’t crack a smile after learning the truth about Joffrey.

Cersei assures a representative from the Iron Bank that the gold is on its ways.

Littefinger gives Brandon a dagger. He will help him with anything he needs just like he did with Brandon’s mother. Meera interrupts. She has come to say goodbye. He says goodbye. She gets angry that is all he has to say. Her brother died for him, she almost died for him. He tells her he isn’t Brandon Stark anymore. You died in that cave, she says before leaving I tears.

Arya arrives home. She is at the gate. She tells them who she is. They laugh and tell her to fuck off. She explains to them that Sansa will be mad if they turn her away. They let her come in and sit while they get Sansa. Arya looks around. Sansa finds her in the crypt. They embrace. Arya asks her if she killed Joffrey. Sansa tells her she didn’t but she wished she had. Arya has a list of people she plans to kill. Most of them are dead already.

Sansa tells her that Bran is home too. The two of them go to see Bran by the trees in his wheelchair. Arya hugs him. He tells her that he saw her at the crossroads. Sansa explains that Bran has visions. He gives Arya the dagger after explaining that the dagger was meant to kill him.

Missandei tells Daenerys that there is still no word from the Unsullied. Jon calls Daenerys down to the caves. He wants her to see something. He shows her the dragon glass. She is in awe. He shows her writings on the cave wall from children of the forest. He explains to her that the First Men and the children fought a common enemy. Just like they need to do.

Daenerys tells Jon that she will fight for him and for the north when he bends the knee. His tells her that his people won’t accept a southern ruler. They will if he does, Daenerys tells him.

Tyrion has come to tell Daenerys that they took Casterly but Cersei is controlling the food and she is losing the war. Daenerys asks Jon what she should do.

Brienne is teaching a soldier how to fight. Arya wants to train with her. She eats the hound. Sansa and Little Finger watch. Arya fights with skill, impressing all of them.

In the distance, Jon sees a Lovejoy ship. They pull up on shore. Theon says hello to Jon. Jon grabs him. He won’t kill him because of what he did for Sansa. Theon has come to ask Daenerys for help getting his sister back from Euron.

Jamie is talking to the soldiers about House Tyrell. The hear someone approaching in the hills. Jamie yells spears and shields. They all form a line. Their enemy draws closer on horseback. Daenerys comes riding on her dragon who breaths fire, lighting so many on fire. Jamie’s men all line up to shoot the dragon but it is no use. It reigns fire down on all of them.

Bronn sets up the catapult. Jamie tries to stay alive. Tyrion watches from the hillside. Bronn shoots and misses. He tries again and shoots the dragon in the armpit. The dragon goes wild in the air with the Daenerys on its back.

The dragon makes a landing while Daenerys hops off and tries to pull the large arrow it. Jamie sees his chance to ride quickly to her and stab her. Tyrion watches from a distance as he talks under his breath to Jaime. “Run you fucking idiot!” But just as he gets close the dragon breathes fire at Jamie who is rescued by one of the soldiers. He throws him into the ocean water, shielding them from the heat.