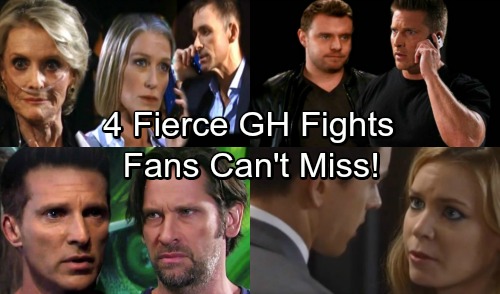 General Hospital (GH) spoilers tease that some heated confrontations are brewing on the ABC soap. Several characters have stunning faceoffs headed their way and they don’t even know it yet! Here are four fierce fights that GH fans won’t want to miss.

Jason (Billy Miller) and Patient Six (Steve Burton) will obviously find themselves at odds pretty soon. The longer Patient Six is in Port Charles, the more he’s going to want his family back. Of course, Jason nearly lost everything after his gunshot wound put him in a coma. He has no intention of letting Sam (Kelly Monaco) or his kids slip through his fingers.

Jason and Patient Six will battle it out, but only the facts can help this situation. Even then, there should be some conflict. Sam, Jake (Hudson West) and Danny (T.K. Weaver) will be mixed up in all of this. Scout will also be a factor since she’ll permanently tie current Jason to Sam. In other words, this is going to get messy. Stay tuned to watch current Jason and classic Jason face off.

Patient Six will should make Franco feel his wrath at some point. GH viewers know current Jason loathes the man, but he’s learned to tolerate him for Liz’s (Rebecca Herbst) sake. Classic Jason hasn’t had a chance to get used to this new-and-improved Franco, so trouble’s brewing.

Plus, Franco’s twin revelation will add to the chaos. Patient Six will start to get people on his side, but Franco’s info could cause some setbacks. Once everyone’s in the loop on Drew, Patient Six may be at a disadvantage. He’ll have to work harder to prove he’s the real Jason, so he could resent Franco even more.

Nelle’s (Chloe Lanier) storyline is obviously building to some massive shocker. Is there something so dark it could destroy her relationship with Michael (Chad Duell) forever? A major confrontation is coming up, so Michael may find out the final blow that could change everything.

Nelle could be revealed as Zack’s murderer or it could be something even worse. However, we can’t rule out a twist. General Hospital spoilers say Nelle will watch her life unravel, but things may not be as they seem. GH is pulling out all the stops to make Nelle look guilty, so it’s possible the shocker will be that she’s innocent! Regardless, this sweet couple won’t be so sweet for long.

Cassandra (Jessica Tuck) is working hard to get Valentin (James Patrick Stuart) on her side and her plan will probably pay off. Unfortunately, it’ll also cost Valentin big time. General Hospital spoilers state that Valentin may turn the tables after a series of devastating losses. Cassandra may fear for her life soon enough!

Are you excited about the fierce fights that are looming? We’ll give you updates as other GH news comes in. Stay tuned to the ABC soap and don’t forget to check CDL often for the latest General Hospital spoilers, updates and news.