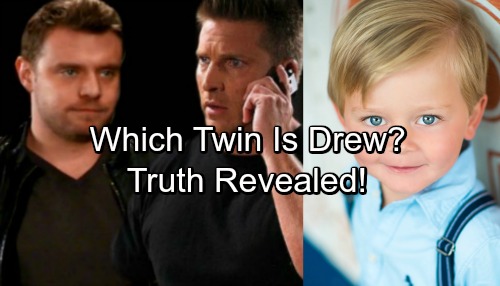 General Hospital (GH) spoilers tease that Franco’s (Roger Howarth) nightmare has put him on the path to the truth. Asher McDonell just popped up as Franco’s young friend, Andrew (aka Drew). This adorable little boy has the same piercing blue eyes we see whenever Steve Burton (ex-Jason, Patient Six) hits the screen.

It’s possible that this is a clue about which actor will play Drew, but we have to remember that Patient Six and current Jason (Billy Miller) are twins. Perhaps the goal was to get a kid who resembled a young version of Steve Burton and reveal the rest later. There’s still plenty of evidence that suggests Burton’s GH character is the true Jason Morgan.

Regardless, Franco’s nightmare was certainly disturbing! Franco imagined little Drew shouting, “You killed me!” This dream understandably left him rattled, but it’s also pushing him toward the real story.

In order to get peace of mind, Franco needs to check out Betsy’s (Deborah Strang) claims. Despite that alarming dream, it seems Franco doesn’t completely buy that Drew is dead. A quick search of the death certificate database backed up that idea. Without a death certificate, how can Franco ever accept that Drew is really gone for good?

Fortunately, he can’t! Now that Franco knows Drew may be out there somewhere, it’s doubtful that he can leave Jason out of the loop indefinitely. Even if Jason finds out on his own, Franco will have to discuss this with him sooner or later. General Hospital spoilers hint that things are about to get incredibly messy for Jason and his family.

Of course, Burton’s character will play a big role in the drama. He may claim he’s the real Jason, but Franco’s revelation will create even more doubts. Both Patient Six and current Jason will have to deal with some identity issues. There’s sure to be some confusion about timelines and memories.

Let’s hope Franco can be the one to bring them together and sort out what actually happened. Are you excited to see how this hot plot plays out? We’ll give you updates as other General Hospital news comes in. Stay tuned to ABC’s GH and don’t forget to check CDL often for the latest General Hospital spoilers, updates and news.