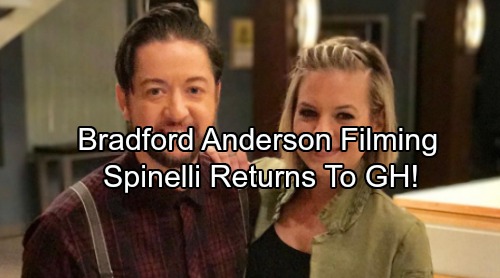 General Hospital (GH) spoilers reveal Bradford Anderson returns to Port Charles as the beloved and eccentric Damian Spinelli. He has portrayed computer hacker Spinelli also known as “The Jackal” since he originated the role in November 2006. Although the role was recast briefly to Blake Berris, most fans would agree, Anderson is the one true Spinelli.

GH’s Spinelli has been a very diverse character, involved with almost everyone in Port Charles. He initially arrived as Alcazar’s (Ted King) hacker attempting to destroy Sam Morgan (Kelly Monaco). He has been kidnapped with Lulu Spencer (then-Julie Berman), provided marijuana to attorney Alexis Davis (Nancy Lee Grahn) to help with the pain and side effects from her lung cancer treatments.

Of course, General Hospital fans will remember when Georgie Jones (lindze Letherman) was madly in love with him but was murdered by the Text Message Killer; her death drew Maxie Jones (Kirsten Storms) and Spinelli together; resulting in one of the most beloved love stories ever!

General Hospital spoilers tease that its the perfect time for Spinelli to come back because not only is his best friend, Samantha Morgan acting erratic, even shooting Port Charles’ mob father, Sonny Corinthos (Maurice Benard); but the much anticipated return of Steve Burton, who is believed to be twins with the man currently playing Jason Morgan (Billy Miller). Could Spinelli be the key to unravel all the bad things happening to his dear friends?

Viewers of the ABC soap opera know that Maxie Jones is having a rough time with her marriage to PCPD Detective Nathan West (Ryan Paevey); there is no doubt the two love each other but it seems Maxie is more interest in her job in Oregon because it keeps her close to her and Spinelli’s daughter, Georgie (Lily Fisher). What Maxie doesn’t know is her husband has been busy with General Hospital nurse Amy Driscoll (Risa Dorken Clark), working as the face of Man Landers to help her and her disabled brother financially.

There are several storylines that Spinelli could be involved in and it sure is great to see Bradford Anderson return to the role we all adore. Be sure to tune into ABC’s General Hospital (GH) to catch up on everything happening in Port Charles and be sure to watch Bradford Anderson’s return of the quirky Damian Spinelli. Check CDL General Hospital spoilers often for updates and news!