General Hospital Spoilers for the Next 2 Weeks: Franco and Liz Reunite – Valerie Gets a Shock – Sam’s Stunning Choice 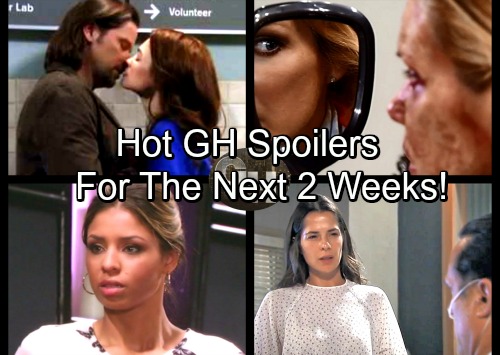 General Hospital (GH) spoilers for the next two weeks tease that some major revelations are brewing. The week of August 14-18 will drop some interesting information in Felicia’s (Kristina Wagner) lap. There’s a good chance this is about Nelle (Chloe Lanier). That storyline has faded to the background lately, but it looks like Felicia’s latest scoop could keep things moving along.

While Felicia mulls over this info, Anna (Finola Hughes) will get a surprise of some sort. Perhaps Andre (Anthony Montgomery) will have a little something up his sleeve. Whatever the case, it seems this curveball will force Anna to ask for a favor. She’ll have to juggle a few projects, but we all know Anna is basically Wonder Woman. She can pull off almost any challenge she takes on.

Other General Hospital spoilers say Griffin (Matt Cohen) will lack confidence. He’ll probably feel like he’s just not getting through to Ava (Maura West). Griffin wants to help, but Ava thinks she’s a lost cause. Luckily, Elizabeth (Rebecca Herbst) will offer support. She’ll give Griffin some words of encouragement and he’ll reach out to Ava once again.

Liz will also be reunited with Franco this week, so “Friz” fans should get ready for some romance. General Hospital spoilers state that Franco will have great news as well. He’ll reveal that he managed to get some of his artwork back, which will undoubtedly put him in a good mood. Once he has Liz back in his arms, Franco should officially be on cloud nine.

The week of August 21-25 will bring an unexpected request for Ava. It sounds like Franco’s art will come back into play. He might want to sell his paintings at Ava’s gallery. Maybe Franco’s suggestion will convince Ava to give her career another shot.

Elsewhere, Valerie (Brytni Sarpy) could have a date with destiny. GH spoilers hint that she’ll be surprised by the identity of her mystery man. Stella (Vernee Watson) recently offered to set Valerie up on a date. Val eventually got on board with the idea, but she’s in for a shock when Curtis (Donnell Turner) appears. Will Curtis and Valerie reconnect thanks to Stella?

Across town, Sam’s (Kelly Monaco) guilt will lead to a stunning choice. She may decide to make a full confession to the police. Meanwhile, Alexis (Nancy Lee Grahn) and Carly (Laura Wright) will discover that they’ve been through a similar experience. They should be grateful that Sam’s story didn’t turn out like Morgan’s (Bryan Craig).

The next two weeks are going to pack a punch on the ABC soap. We’ll give you updates as other details emerge. Stay tuned to GH and don’t forget to check CDL often for the latest General Hospital spoilers, updates and news.  Sign up for our FREE newsletter by clicking here and get the latest breaking soap news!