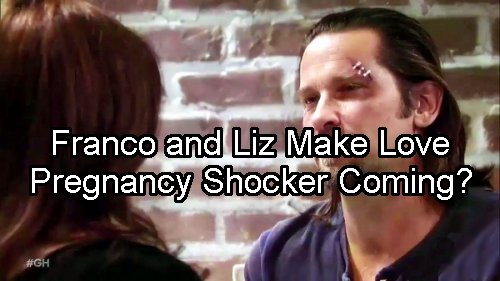 General Hospital (GH) spoilers from a steamy new promo show us Franco (Roger Howarth) and Liz Webber (Rebecca Herbst) will finally get the sexy love scene that Friz fans have been dying to see. But will Franco and Liz finally bedding down result in some baby making?

A new promo is out that has aired in some markets showing Liz telling Franco that they love each other so it’s time to take the next step. Then the scene switches to her in a sexy bra on her bed and they finally take the Friz relationship to the next level. But what then?

We all know that Liz is a fertile chick that gets knocked up by almost every guy she sleeps with. She has three sons by three baby daddies. Unless she secretly got her tubes tied and GH didn’t tell us, there is a real possibility she could get pregnant by Franco.

That would be a huge deal! Liz preggers by Franco would set off shockwaves all over Port Charles. Even her kids’ grandmas, Monica Quartermaine (Leslie Charleson) and Laura Spencer (Genie Francis), would flip out even though they’ve sort of accepted Franco in her life.

Franco and Sam Morgan (Kelly Monaco) have reached a tentative peace after she rescued him from the storage unit, but Jason Morgan (Billy Miller) is always ready to explode about his other baby mama and Franco. Sam and Jason would go postal about a Friz baby.

A baby with Franco means he would be a permanent part of Liz’s life – and JaSam’s – so that’s a problem. Franco’s BFF Liesl Obrecht (Kathleen Gati) would be thrilled and so would Heather Webber (Robin Mattson). Franco having a biological child has been hinted at many times.

Remember when Dr O handed him little Leo and walked off to test him and encourage Franco to try fatherhood? But do you know who would react even more harshly? Nina Clay Cassadine (Michelle Stafford)! She wanted a child so badly with Franco and he continually shut her down.

Then she got the bad news about menopause so she couldn’t have a kid anyway. If Nina found out Franco knocked up Liz, she would go nuclear. But the worst reaction might come from Franco himself. He’s struggled with and largely beaten his demons for now, but trouble is brewing.

Some brand new spoilers for mid-February reveal Franco must face his dark side again. Franco doesn’t trust himself to have a biological child. Would Franco walk away from Liz if she turned up pregnant? He hates the idea of his DNA being passed down, so he might leave her.

A Friz pregnancy would divide fans since half love Franco and half hate him. Liz is a target for many fans because of all those kids with different dads – although several other women in Port Charles have multiple baby daddies starting with Carly Corinthos (Laura Wright).

It would be dramatic to bring a biological child into Franco’s life given all the obstacles and haters Franco and Liz would face, but it would be good soap watching. What do you think? Will GH go there and create a baby Friz? Share your comments below.