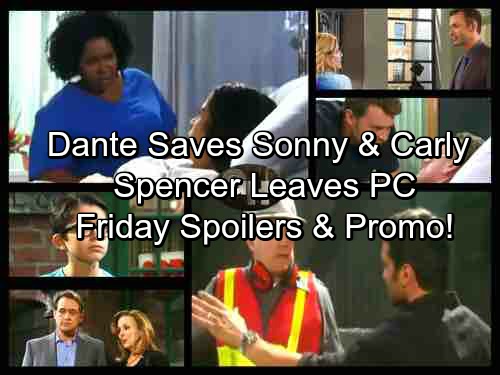 General Hospital (GH) spoilers for Friday, August 4, tease that Dante (Dominic Zamprogna) will talk to a construction worker down by the distillery. He’ll be desperate to stop the demolition so he can check the area. Dante will declare that he has reason to believe someone’s on that site.

Of course, GH fans know Dante is right. After getting a tip from Michael (Chad Duell) and Nelle (Chloe Lanier), Carly (Laura Wright) headed over and now she’s trying to get Sonny out of there. The countdown is wrapping up, but it could still be stopped at the last second. 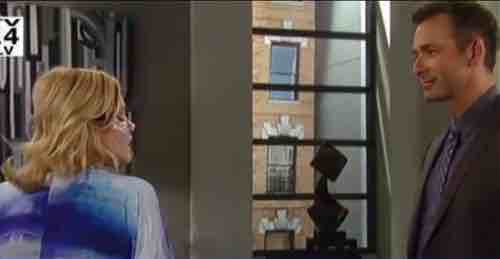 If not, the first blast might not be too bad. Regardless, General Hospital spoilers state that Dante will help get Carly and Sonny to safety. This family has had to endure a lot lately, but maybe this lucky break will turn things around.

At GH, Sam (Kelly Monaco) will try to make sense of the thoughts that are swirling in her head. She’s confusing some recent events and struggling to determine what really happened. General Hospital spoilers say Sam will recall more about her heated encounter with Sonny. She’ll begin to realize that this wasn’t a dream, but the details may not become clear just yet.

In Garvey’s (Rick Ravanello) room, Jason (Billy Miller) will attempt to wake him up. Garvey flatlined when Jason tried to get some answers out of him and the situation looks grim. General Hospital spoilers hint that Garvey may take Sam’s secret to the grave. It seems Jason will have to find another path to the truth.

At Ava’s (Maura West) penthouse, Valentin (James Patrick Stuart) will hope to pull off his plan. He needs Ava to recant her statement about Nikolas’ (Tyler Christopher) murder, but she’ll wonder why he thinks she would do that. Ava will ask what Valentin could possibly offer her in return.

Valentin will insist that he could give Ava her life back. He’ll be willing to restore Ava’s appearance if she chooses to cooperate. Ava will be awfully tempted to take Valentin up on this. Even if she rejects the idea now, Ava could easily change her mind down the road. One way or another, we know Ava will eventually look like herself again.

Other General Hospital spoilers say Laura (Genie Francis) will give Spencer (Nicholas Bechtel) some bad news. She’ll suggest that she hates to do this, but she’s made a decision that affects her grandson’s future. It sounds like Spencer is headed back to boarding school. Laura just can’t let him run amok in Port Charles anymore.

Life will be much easier for everyone if Spencer returns to Europe, but Laura will continue his fight against Valentin. We’ll give you updates as other GH info comes in. Stay tuned to the ABC soap and don’t forget to check CDL often for the latestGeneral Hospital spoilers, updates and news. Sign up for our newsletter by clicking here and get the latest breaking soap news!