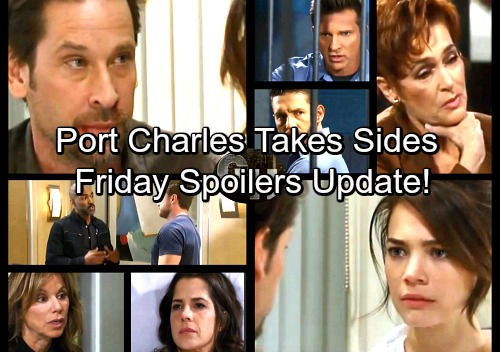 General Hospital (GH) spoilers updates for Friday, November 3, tease that Curtis (Donnell Turner) will accept a challenge. Jason (Billy Miller) will fill him in on the Patient Six (Steve Burton) mess and Curtis will agree to help him figure it out. He’ll make it clear that he’s on Jason’s side and will do whatever he can to prove Patient Six is a phony.

Meanwhile, Sonny (Maurice Benard) will try to get Diane (Carolyn Hennesy) to join Patient Six’s team. He’ll make his pitch, but Diane won’t be so sure she buys the story. She’ll want Sonny to consider the possibility that he’s being played. Sonny will understand Diane’s concerns, but he won’t let any doubts creep in. You can bet that Sonny will support Patient Six every step of the way.

At GH, Sam (Kelly Monaco) will continue to struggle. She’ll open up to Alexis (Nancy Lee Grahn) about how shocking all of this has been. Alexis will force Sam to tackle some tough issues. She’ll know that this is painful, but Sam needs to keep an open mind. Alexis will push Sam to admit that Patient Six could be telling the truth.

At some point, Scott (Kin Shriner) will stun Alexis with updates on Julian (William deVry). She’ll realize she needs to make a bold move. It seems an incident took place in prison, so Alexis will want more info. She’ll eventually head to the state pen, which means some “Julexis” scenes are coming up soon.

Back at GH, Franco (Roger Howarth) will have a confession to make. Liz (Rebecca Herbst) will listen intently as Franco describes what happened to Jason’s twin. Will he share an accurate version of what he knows or could he leave out a few crucial facts? Liz is undoubtedly getting tired of Franco’s secrets, so adding to the deception would be risky.

Other General Hospital spoilers say Patient Six will confront Dr. Klein (Gene Farber). He’ll give him a cold stare as they stand behind bars. Patient Six will do his best to learn who Dr. Klein worked for and why. Dr. Klein will have to decide whether he’s going to sell someone out or make P6 work a bit harder.

Elsewhere, Griffin (Matt Cohen) will want to nail down the details of his next date with Ava (Maura West). It looks like Ava will be on board with the hunky doc’s plans. Will this relationship keep moving forward? We’ll keep you posted as other General Hospital news comes in. Stick with the ABC soap and don’t forget to check CDL often for the latest General Hospital spoilers, updates and news.