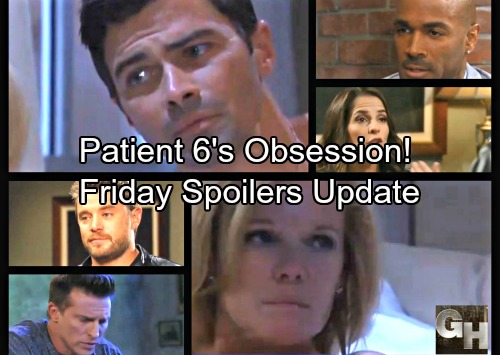 General Hospital (GH) spoilers for Friday, October 13, tease that Michael (Chad Duell) and Nelle (Chloe Lanier) will battle more issues. Her donation plan didn’t work out as well as she expected, but Michael will think he has a solution. He may argue that a private investigation could clear Nelle’s name and ease the tension with his family.

Nelle should get pretty spooked by the idea. She’ll think looking into Zack’s death is pointless since no one would believe any exonerating evidence anyway. Nelle will push Michael to let it go, but his plan is already in motion.

Curtis (Donnell Turner) found out some intriguing info in Florida and he’ll deliver it in Friday’s GH episode. He’ll explain that there’s another crack in Nelle’s story. She told the police she wasn’t a very strong swimmer, but it appears her high school extracurricular activities will suggest otherwise.

Michael will note that Nelle was nervous about him stirring up trouble. Curtis will think Nelle might have something else to hide. Jason (Billy Miller) also has a secret, but it’s finally time to let Sam (Kelly Monaco) know what it is. She’ll be shocked when Jason admits he wants to buy a media company.

At Crimson, Valentin (James Patrick Stuart) will drop by to share his own news with Nina (Michelle Stafford). He’ll state that he intends to purchase Derek Wells Media. Will Jason beat Valentin to it or will Val come up with some extra cash to win out? Could they go business together? It sounds like a tricky situation’s ahead.

Other General Hospital spoilers say Griffin (Matt Cohen) and Ava (Maura West) will talk in bed. Ava will surprise Griffin by insisting that their night of passion was a mistake. She’ll contend that there’s just no way this can work, especially since Griffin’s still got one foot in the church.

Griffin will likely cut ties with the priesthood soon. He can’t control himself around Ava, so he might as well step away from his parish for good. Meanwhile, General Hospital spoilers say Finn (Michael Easton) will grow tired of Anna’s (Finola Hughes) scheme. He’ll feel like he’s done all he can do for her. Anna will have another strategy to try, but Finn will just want to wrap this up.

On the ship, Patient Six (Steve Burton) will consume every bit of information he can. Huxley (Trent Dawson) might argue that Burton’s character seems a little obsessed. However, Patient Six will just want to make sure he’s in the loop once he gets home.

Unfortunately, nothing can prepare Patient Six for the sight of Sam with current Jason! We’ll give you updates as other GH details emerge. Stay tuned to the ABC soap and don’t forget to check CDL often for the latest General Hospital spoilers, updates and news.