General Hospital (GH) spoilers for Friday, June 9, tease that Sonny (Maurice Bernard), Carly (Laura Wright), Dillon (Robert Palmer Watkins) and Kiki (Hayley Eric) will all await word on Ava’s (Maura West) fate. She just flatlined, but Griffin (Matt Cohen) will come to her rescue. The good doctor will work his magic and Ava will rejoin the land of the living.

Kiki will once again struggle with how to feel about Ava. She’s livid over what Morgan (Bryan Craig) went through, but Ava is still her mother. Kiki won’t be sure Ava deserves her tears, but she’ll cry them anyway. She’ll probably apologize to Carly and Sonny for even caring. Kiki knows they faced the worst grief of their lives after Morgan died.

Carly will reiterate that Kiki isn’t responsible for this mess. She’ll point out that Ava made her own choices. Kiki understands that, but she’ll continue to blame herself on some level. She may wish she’d backed off Morgan and let Ava have her way.

Unfortunately, there’s nothing anyone can do now. Kiki can play “shoulda, woulda, coulda” all she wants and it won’t bring Morgan back. She’ll just have to move on. Meanwhile, Curtis (Donnell Turner) will hope that Aunt Stella (Vernee Watson) can move on as well. He’ll push her to let go of the past and the animosity she feels toward Jordan (Vinessa Antoine). 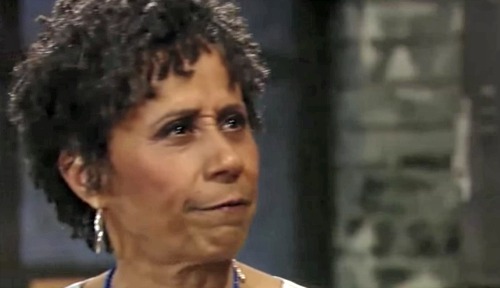 Stella will make it clear that she can’t forgive and forget. It sounds like the conflict will get worse before it gets better. Elsewhere, GH spoilers say Julian (William deVry) will decide he’s ready to fight. He’ll meet with Scott (Kin Shriner) to go over his case. Scout beat the odds and now Grandpa Julian is hoping he can, too.

While Julian works on getting out of trouble, Lucy (Lynn Herring) will land in some hot water of her own. She’ll look nervous as Dante (Dominic Zamprogna) interrogates her about Ava. He’ll want to know exactly what went down, but Lucy will wonder if honesty is really the best policy. She’ll worry that she could be punished for keeping her mouth shut too long.

Other General Hospital spoilers say Finn (Michael Easton) will realize Hayden (Rebecca Budig) seems a bit frazzled. When he asks what’s wrong, Hayden will slump back and hint that she had children. She tried to take care of Cameron (Michael Leone) and Spencer (Nicholas Bechtel) for the day, but it turned into a total disaster.

Hayden will feel like she’s not cut out for motherhood, but Finn will promise she’s going to be great. He might argue that dealing with two rowdy boys was simply too much for day one. Will Hayden gain some confidence soon? We’ll give you updates as other General Hospital news comes in. Stay tuned to ABC’s GH and don’t forget to check CDL often for the latest General Hospital spoilers, updates and news.