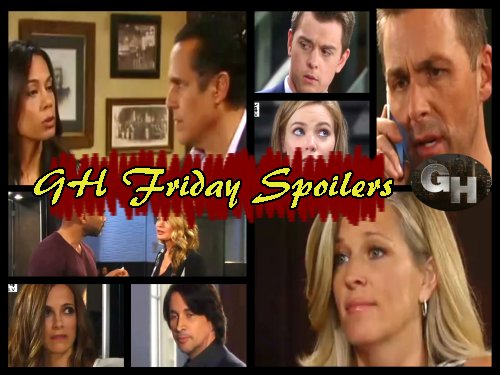 General Hospital (GH) spoilers for the cliffhanger new GH episode on Friday, May 12 reveal Dr Griffin Munro (Matt Cohen) reiterates to Hayden Barnes (Rebecca Budig) the shocking results from the urine test he ran using her sample instead of Dr Hamilton Finn’s (Michael Easton). Griffin takes Hayden by surprise when he tells her that she’s pregnant and she’s not the only one shocked.

Finn just announced he bought a townhouse and wants to put down roots with Hayden and his lizard Roxy so a baby could make four. With Hayden unsure about where she and Griffin are at, General Hospital fans ask will she be excited by this news or not? Over by the docks, Nelle Hayes Benson (Chloe Lanier) and Michael Quartermaine (Chad Duell) talk as she waits for the Wyndemere launch. 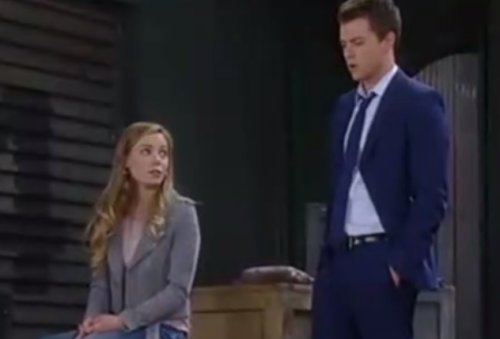 Nelle flirts with Michael and tells him she’s going back over to Spoon Island for the night unless he can think of a reason for her to stay. General Hospital spoilers indicate Michael makes a shocking confession and it seems a new crisis for Nelle will change the fate of this young couple and will soon put them back on the path to romance even though his parents won’t like that one bit.

GH fans know that’s not Anna Devane (Finola Hughes) but Valentin Cassadine (James Patrick Stuart) is still in the dark as he deals with her on the phone. Anna is flirty and wants him to come see her since she eavesdropped and knows things went badly and Nina Clay Cassadine (Michelle Stafford) walked out on him. Anna’s twin Alex thinks this is the perfect time to pounce while he’s vulnerable. 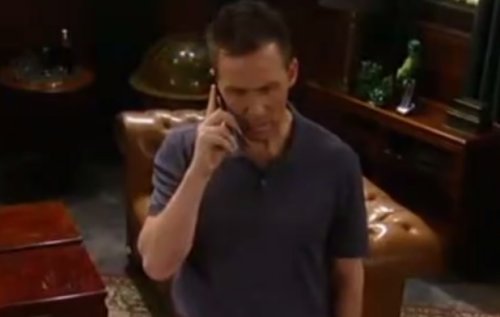 What Alex didn’t count on is how devastated Valentin is by Nina leaving him – and he blames Anna. Valentin tells Anna he won’t see her today or any other day. General Hospital spoilers say Valentin is done with her and wants to prove himself to Nina and win her back. At the same time, over at the MetroCourt, Curtis Ashford (Donnell Turner) and Nina discuss the implications of the bug they found in the watch.

Nina tells Curtis that Anna has been targeting Valentin and thinks the listening device helped Anna figure out exactly how to aim to take down her husband. Nina is now more furious than ever at Anna. General Hospital spoilers claim it won’t be too long before Nina runs back to Valentin with the dirt on Anna and shows him just how misplaced his feelings were for his old WSB “friend.” 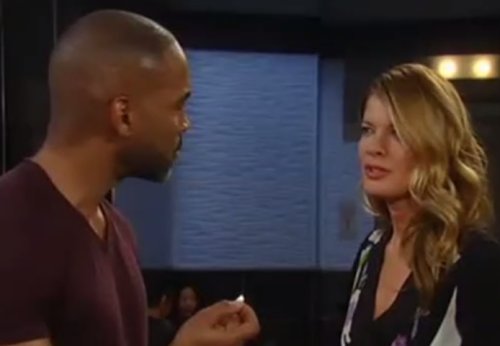 After Alex’s unsatisfying phone call with Valentin, she hangs at Kelly’s Diner, and is taken off guard by Jordan Ashford (Vinessa Antoine). Jordan asks “Anna” how long she thought she could hide form her and Alex must scramble to cover since she can’t handle prolonged conversations with these strangers from Anna’s life that she doesn’t know.

Jordan wants advice and it might be on her love life since she just had that unpleasant confrontation with Valerie Spencer (Brytni Sarpy) because she told Val to steer clear of Curtis but then started dating him herself. Over at Poluzzo’s, Carly Corinthos (Laura Wright) demands to know what’s going on between Martina Morales (Daya Vaidya) and Sonny Corinthos (Maurice Benard). 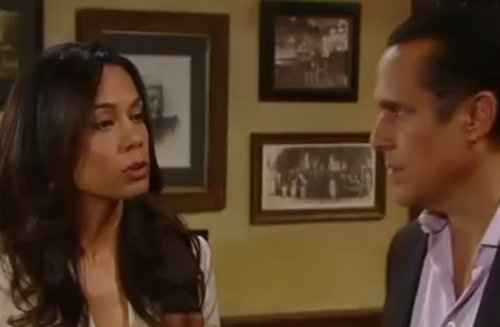 Carly caught them hand in hand and demands an answer. Martina says she’ll tell Carly everything, but General Hospital buzz is that it looks like there are more lies coming Carly’s way because no way will Martina admit to sleeping with Sonny and violating her ethics. Will Carly believe the lies? Share your comments below on these spoilers for Friday, May 12 and tune into CDL for more General Hospital spoilers.