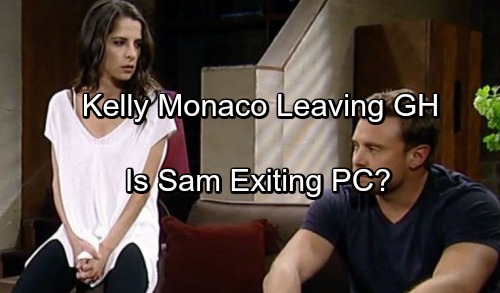 General Hospital (GH) spoilers reveal Kelly Monaco, who portrays the beautiful Samantha “Sam” Morgan, could be heading out the doors of General Hospital soon with a shock exit. The news shouldn’t really be too surprising for avid fans of ABC’s Daytime Drama series – her character has been put in an impossible situation with a difficult story for anyone to watch. There has been GH buzz lately that Kelly has had enough and intends to exit General Hospital in the near future.

GH’s Jason Morgan (Billy Miller) seems to be completely oblivious to his wife’s mental state, as he willing left the country, leaving her cowering in their living room as if death was at her door. Sam has been hallucinating and acting very out of character, with Dr. Griffin Munro (Matt Cohen) feeling it could be post traumatic stress disorder (PTSD) from everything her aunt Olivia “Liv” St. John/ Jerome (Tonja Walker) put her through while she was in labor with Scout. 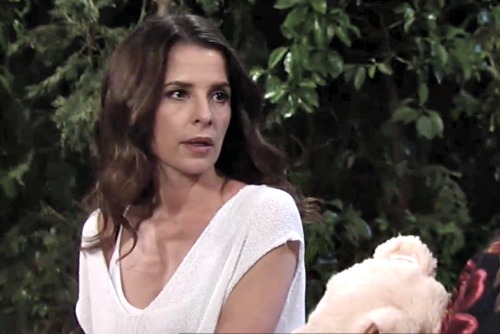 Its not just her present state on General Hospital that should concern fans, but also the actress herself who has been rather elusive when it comes to her online presence recently – only thanking fans for their support and admitting she loves playing Sam. How do you feel about Kelly Monaco possibly vacating her role on General Hospital?

When Samantha McCall first arrived in Port Charles, she was a con-artist who had a tryst with Jasper “Jax” Jacks (Ingo Rademacher) back in 2003. She goes on to have an affair with mob boss, Sonny Corinthos (Maurice Benard) and she ends up pregnant; their daughter is stillborn. She eventually falls in love with Sonny’s mob enforcer, Jason Morgan (then-Steve Burton) and they have an on-and-off again relationship until they finally marry in late 2011.

GH’s Jason ends up supposedly dead, leaving Sam to pick up the pieces, especially she learns the truth that her son, Danny was really Jason’s son and he needed a bone marrow transplant to survive his leukemia. It seems Sam has been through far too much and her mind is either playing tricks on her or she is really sick.

General Hospital’s Kelly Monaco has been able to stand on her own with big powerhouse soap opera veterans like the actors who portray her parents: Nancy Lee Grahn (Aleix Davis) and William deVry (Julian Jerome). There is no lacking in her skills as an actress and if General Hospital sources are right, her leaving the series could be devastating to many fans.

Be sure to tune into ABC’s General Hospital (GH) to catch up on everything happening in Port Charles and see how Sam continues to struggle with her mental health. Check CDL General Hospital spoilers often for updates and news!