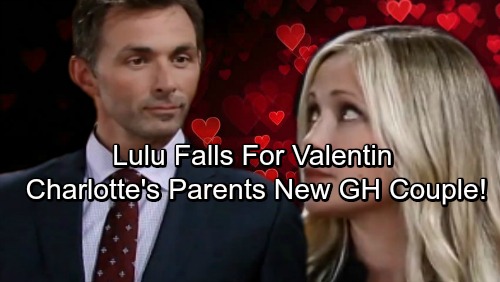 General Hospital spoilers tease that Lulu Falconeri’s (Emme Rylan) connection to Valentin Cassadine (James Patrick Stuart) has been volatile at best; but recently we have seen the duo work as a united front, especially when it comes to their daughter, Charlotte (Scarlett Fernandez).

It all began when Charlotte told her “papa” that her friend Bailey (London Silzer) was diagnosed with scoliosis, forcing her parents to put aside their issues and simply support her and her little friend. While at Shriners Hospital, Lulu was able to see Valentin with new eyes, almost with a bit of admiration and tenderness as he dealt with the situation that frightened and stressed their little girl. Lulu even showed some compassion when Valentin explained to her what he endured on his own journey with scoliosis. 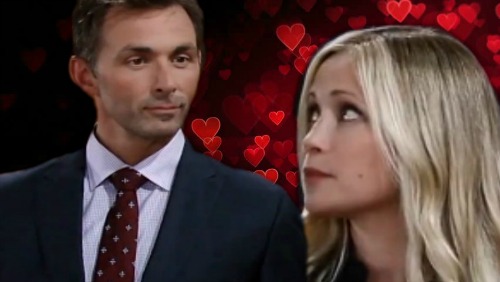 General Hospital spoilers reveal that Charlotte is the ultimate hybrid when it comes to her DNA; no one had expected to ever see a child born from the Spencer and Cassadine family. Many fans will be in an uproar if Lulu and Valentin give in, and become a couple; not only because they should be arch-enemies but also because it would destroy two couples most viewers adore – Lulu and Dante Falconeri (Dominic Zamprogna) and Valentin and Nina Reeves (Michelle Stafford).

Although Lulu and Dante are a beloved couple and plenty of GH fans love Valentin and Nina together, its very plausible that Lulu will gravitate even more towards Valentin if the General Hospital spoilers are true and Oscar Nero (Garren Stitt) ends up being Dante’s son. Lulu became annoying obsessed with Charlotte, causing severe stress on her marriage. How will she react when she finds out her husband may share a child with someone else? We all know Lulu is not one who likes to share!

General Hospital spoilers explain there are many possibilities of how this will happen. We know that Nina and Valentin’s marriage may appear solid, but even Nina, who has a serious jealous streak, would not stand in the way of a young girl’s happiness. She may attempt to prove Valentin’s innocence when it comes to killing his nephew Nikolas Cassadine (Nick Stabile), just for Lulu to be more open about custody but it could work far better than she expected, or wanted, when Lulu finally sees him as a human and not the monster she always thought he was.

GH spoilers acknowledge that this seems like a very odd pairing and almost impossible to be true; but stranger things have happened than parents becoming a couple due to their children and with the right circumstances, anything is possible, right?

Be sure to tune into ABC’s General Hospital (GH) to catch up on everything happening in and around Port Charles. Check CDL General Hospital spoilers often for updates, news, rumors and spoilers!