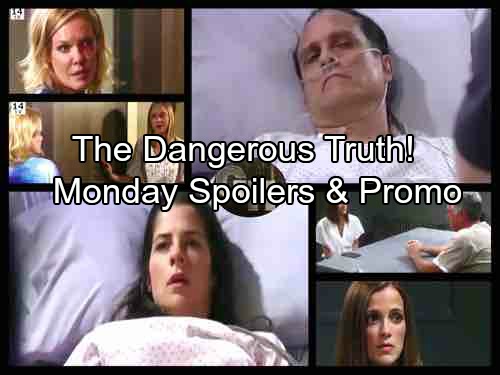 General Hospital (GH) spoilers for Monday, August 7, tease that Kiki (Haley Erin) will drop by Ava’s (Maura West) penthouse. She’ll try to offer some support, but Ava will quickly turn her away. They’ll bicker about whether Kiki should continue to reach out. Ava will just want Kiki to live her life and forget about her mess of a mother. She’ll urge her daughter to leave her alone.

However, Kiki will insist that she’s not going anywhere. She just won’t be willing to give up on Ava. General Hospital spoilers state that Griffin (Matt Cohen) will get a phone call on Monday and he’ll suggest that he can come right over. It’s possible that he’s agreeing to pop in at Ava’s place, but he’ll definitely have other problems to deal with.

Jason (Billy Miller) will seek answers from Griffin in Monday’s GH episode. General Hospital spoilers say Jason will try to determine how Sam’s (Kelly Monaco) illness has affected her. He seems to have a hunch that Sam shot (Maurice Benard), but he won’t want to believe that things went that far.

Griffin will likely confirm that people can exhibit violent behavior in Sam’s condition. He’ll believe Jason should be grateful that they caught this in time. Jason will certainly be glad that Sam’s OK, but different fears are emerging. He’ll hope that he can protect Sam from the drama of any revelations to come.

In Sonny’s room, Dante (Dominic Zamprogna) will want his father to explain his latest statement. Sonny admitted that Garvey (Rick Ravanello) didn’t shoot him, so Dante will ask who did. Of course, Sonny is still groggy from the anesthesia. He could easily cover by saying he’s out of it and didn’t know what he was talking about.

Whatever the case, it looks like Sonny may try to keep Sam’s actions a secret for now. Will he be willing to let Carly (Laura Wright) in on what he’s hiding? Down the hall, Finn (Michael Easton) will have good news for Sam. Unfortunately, she won’t be able to enjoy it. General Hospital spoilers say Sam will still be pretty shaken up from her nightmare.

Finn will wonder what’s wrong, but Sam probably won’t give him any details. She’s still trying to figure out what really happened and what’s in her head. Meanwhile, Hayden (Rebecca Budig) will visit someone tied to her past. She’ll ask for honesty as she works to find a way out of her difficult situation.

It sounds like a great episode is in store for us. We’ll give you updates as other GH info comes in.Check CDL General Hospital spoilers often for updates and news!  Sign up for our newsletter by clicking here and get the latest breaking soap news!