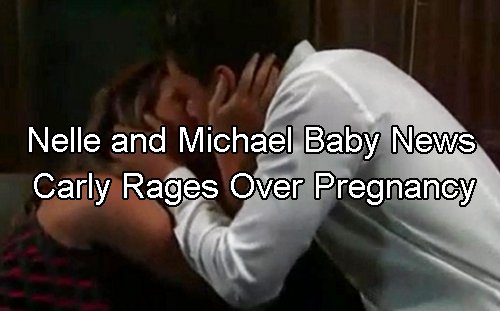 General Hospital (GH) spoilers reveal that Nelle Hayes Benson (Chloe Lanier) and Michael Quartermaine (Chad Duell) might have a shocking outcome from their recent night of passion. Carly Corinthos (Laura Wright) will be angry enough when she finds out Nelle and Michael were intimate, but even more outraged if the spoilers are true that Nelle will turn up pregnant with a Quartermaine baby.

Nelle might ordinarily be careful about her birth control given that she only has one kidney, but don’t forget when Nelle was mugged, she went to General Hospital and that could have messed up her regimen. First, Nelle was in the hospital for several days. Since her purse was stolen and she was away from home, was Nelle taking her birth control pills?

Second, Nelle had problems with her kidney from the accident so they might have dosed her with antibiotics. Everyone knows that messed with your birth control. Third, there didn’t seem to be any signs of safe sex happening with Nelle and Michael, so there was no backup. But the fourth thing is the biggest issue to consider – and it’s called karma.

Remember when Carly got pregnant with a Quartermaine baby (that turned out to be Michael) and it turned out to be a big mess and a lot of drama? It seems that Nelle is following in her adoptive sister’s footsteps to a tee. Nelle did the same thing with Sonny Corinthos (Maurice Benard) that Carly did with Tony Jones (Brad Maule).

The only difference was that Carly slept with Tony for real and Nelle didn’t actually do it with Sonny. Then Carly turned up pregnant with a baby from a night with AJ Quartermaine (then Billy Warlock) and tried to lie and say the baby was someone else’s. That baby lie and the drama it caused eventually lead to AJ being shot and dying.

So, this time, maybe Carly will react a little better to Quartermaine baby news. No, she won’t. General Hospital spoilers say Carly will be furious when this baby news breaks loose. Carly will accuse Nelle of getting pregnant on purpose, but Michael knows she didn’t since they didn’t plan on sleeping together and Nelle didn’t plan on her birth control getting messed up with her hospital stay. 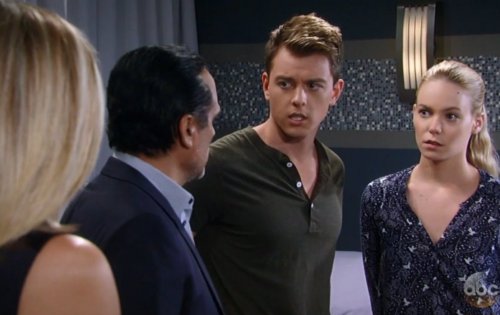 But can Nelle’s poor health withstand a pregnancy? With only one kidney, having a baby is a risk. That’s not something Nelle would plan given that her one kidney was just damaged. Between the medical risk and the pressure from Carly raging at her, Nelle’s life might be at risk again and Michael won’t like his mom abusing Nelle.

Michael and Nelle are falling in love and he won’t let Carly stand in their way. And if baby makes three, Michael will step up to do the right thing. Share your comments below on Nelle’s surprise pregnancy and tune into CDL often for the latest General Hospital spoilers, news and updates.