BY Jessica Jones on August 17, 2017 | Comments: 7 comments
Related : Days of Our Lives, General Hospital, Hot News, Soap Opera, Spoiler, Television, The Bold and the Beautiful, The Young and the Restless 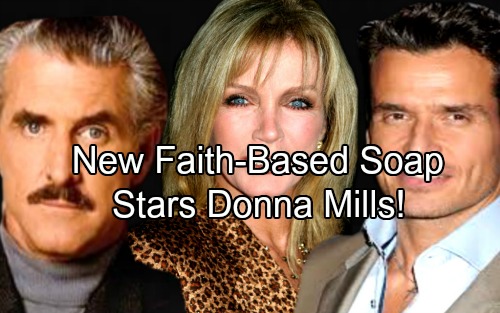 General Hospital (GH) spoilers tease that we’ll see plenty of violence, sex, schemes and betrayals over the next few months. It’s clear that Port Charles residents are comfortable with their sins, but a new soap is taking a different approach. A Christian-based entertainment company called PureFlix is making a drama that will take the moral high road.

PureFlix CEO Greg Gudorf discussed this new project on Pure Talk, a talk show that’s also produced by the company. He feels it’s possible to share a narrative without anything too scandalous. “The underlying drama and the underlying story can be told without that emphasis,” Gudorf said.

Some longtime soap fans might remember a show called Another Life, which aired on the Christian Broadcasting Network in the early ‘80s. It was also a faith-based program, but PureFlix will attempt to do their own modern spin on the genre. They’re hoping to use more virtuous themes and eliminate risqué content.

This show will be called Hilton Head Island and several notable names have signed on. Former General Hospital star Donna Mills will be part of the cast, so that should be fun for GH viewers who remember her as Madeline Reeves. Michael Swan is on board, too. You may recall his time as Duncan McKechnie on As the World Turns and Adam Alexander on The Bold and the Beautiful.

Faith Wire had the scoop on those stars as well as Antonio Sabato, Jr. (Dante Damiano on The Bold and the Beautiful). There’s no word yet on what their characters will be like, but they’ll undoubtedly pull them off. Having a great cast could help PureFlix as they prepare to launch this clean soap.

The drama will feature 12 episodes, but they may order additional ones if it’s a hit. It should be interesting to see how the show fares without the typical soap shockers. It may be a little tougher to grab the audience’s attention, but there are ways to shake things up without a salacious slant.

Family conflict, medical issues, financial hardships and temptation are all topics that could be addressed. PureFlix will air the show on their streaming service this fall, so fans of the other main soaps may want to check it out. It certainly sounds intriguing!

In the meantime, you can see all the usual immorality on GH. General Hospital spoilers hint that deception and crimes will cause more chaos soon. We’ll give you updates as other news comes in. Stay tuned to the ABC soap and don’t forget to check CDL often for the latest General Hospital spoilers, updates and news.  Sign up for our FREE newsletter by clicking here and get the latest breaking soap news!