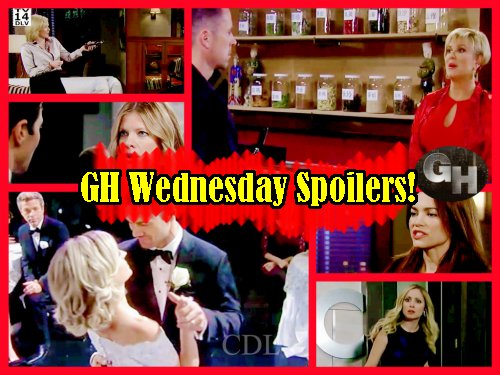 General Hospital (GH) spoilers for Wednesday, January 18 reveal post-wedding drama and violence at Naxie’s nuptials. Griffin Munro (Matt Cohen) can sense that something is off and goes to Nina Clay (Michelle Stafford) to shake out a confession from her.

Griffin asks Nina what happened to Claudette Beaulieu (Bree Williamson) and Nina will tell him that Claudette killed herself. Griffin doesn’t believe that for one moment and goes to confront Valentin Cassadine (James Patrick Stuart) about it.

Griffin accuses Valentin of killing Claudette and unfortunately, Charlotte Cassadine (Scarlett Fernandez) hears the ugly things being said about her papa. That freaks her out. Charlotte runs off and Lulu Spencer (Emme Rylan) realizes her daughter is missing.

Lulu goes looking for Charlotte and finds her in the linen closet all sad and upset. Lulu will ignore Valentin’s demand that she wait to tell Charlotte the truth. Once again, Lulu’s impatience gets the best of her – she is a Spencer, after all.

Lulu tells Charlotte the truth that she’s her biological mother. Charlotte won’t take it well and Valentin will be furious. Charlotte needs reassurance from her father on all the things she’s heard – Griffin accusing him of kill her mom plus the Lulu news.

Valentin has other drama to deal with on Wednesday. Anna Devane (Finola Hughes) recovered a partial memory of someone grabbing her in her room at the WSB training academy. She has decided that Valentin assaulted her and attacks him.

Anna slaps Valentin hard and calls him a bastard. General Hospital spoilers reveal that Anna and Valentin have very different recollections of that night at the academy. Anna thinks he hurt her but Valentin stands by his claim that she’s the one that hurt him.

Maxie Jones (Kirsten Storms) and Nathan West (Ryan Paevey) have their first dance as man and wife and spend time with their friends and family oblivious to the drama going on around them. Julian Jerome (William deVry) has to face his demons.

The demon is big sister Olivia Jerome (Tonja Walker). Julian is floored as she promises she will have her revenge. He thought he shot her dead almost 30 years ago, so this is a big shake-up for him and lets him know how much trouble he’s in.

With Julian distracted, Ava Jerome (Maura West) heads to Alexis Davis’ (Nancy Grahn) house to get answers. Ava brings over a bottle of wine and encourages Alexis to have a drink. Alexis struggles with her sobriety and is tempted. How badly will Ava rattle Alexis?

Other GH spoilers tease that Hamilton Finn’s (Michael Easton) addict behavior draws Brad Cooper’s (Parry Shen) attention and has him wondering what the lizard loving doc is up to. Share your comments below on these spoilers for Wednesday, January 18.