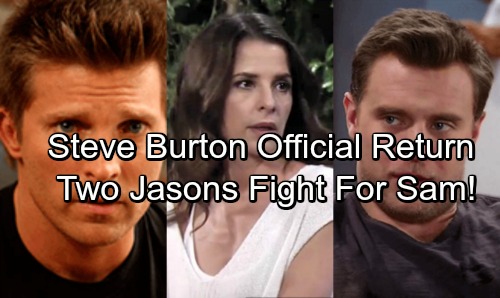 General Hospital (GH) spoilers from a hot new promo released today confirm that Steve Burton is back to GH and it looks like he’ll be in his old role of Jason Morgan. But Billy Miller is also sticking around and that means there’s two Jasons in Port Charles starting soon. But how will this work out and what is GH thinking bringing back old Jason while new Jason is still in town? Here’s what to expect.

Sam Morgan (Kelly Monaco) is suffering from a serious illness that has left her seeing and hearing things. There’s a second Sonny Corinthos (Maurice Benard) living in Sam’s head, so why not a second Jason? Sonny isn’t nearly as ominous as the version in Sam’s head that’s tormenting and taunting her so let’s hope the Jason that shows up soon in her head, with Steve Burton’s face, is a good guy. 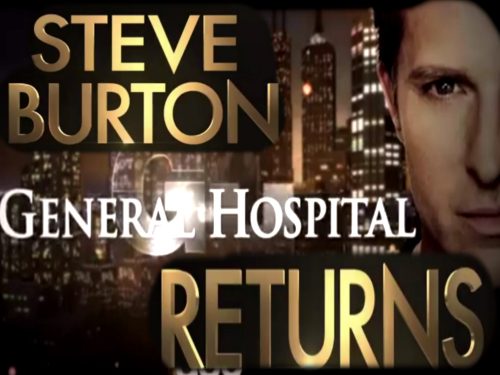 Since Sam is haunted by Jason dying years ago while working for Sonny, it makes sense that General Hospital would bring back Steve Burton since that’s the face he had back then and in Sam’s mind for all the years he was missing, presumed dead and under Helena Cassadine’s (Constance Towers) control. It made no sense when GH did the Cassadine Island flashbacks and Jason had Billy Miller’s face.

With Steve Burton back, GH has a lot more options on what they can do in terms of flashbacks. With Jason and his new face right there in front of Sam and then the other Jason with his old face living in her head, Sam will be more and more confused and tormented. As she unravels, the two Jasons will fight for her – one in real life and one in her head. 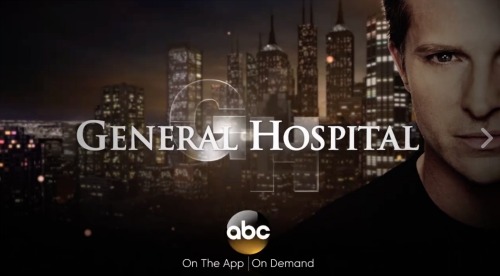 Sam will be torn apart as her illness continues to confuse her and unravel her mind. Sonny is the object of her anger and each Jason will have different advice on how to handle her rage. It won’t be too long before Sam’s mind snaps and she winds up broken. At that point, Sam might be too far gone for either of the two Jasons, or their love for her, to help.

Are you excited that Steve Burton is returning as Jason? Watch the Steve Burton promo below, share your comments below and tune into CDL for more General Hospital spoilers and news.