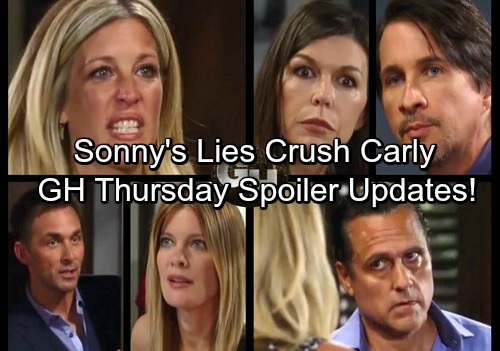 General Hospital (GH) spoilers for Thursday, August 24, tease that Carly (Laura Wright) will feel a deep sense of betrayal. Jason’s (Billy Miller) lies were bad enough, but Sonny’s (Maurice Benard) deception really stings. Carly will want to know why Sonny felt the need to hide the truth. She’ll contend that they had finally gotten to a trustworthy place, but he blew it.

Meanwhile, Sam (Kelly Monaco) will wish she had come to Jason (Billy Miller) sooner. They could’ve avoided this whole ordeal. Of course, Jason will remind Sam that she wasn’t thinking clearly. She wasn’t well enough to realize she needed to open up. All Sam could think about was eliminating Sonny’s threat.

General Hospital spoilers state that Sam will worry about what’s next. The police are still investigating and she can’t be certain her hallucinations won’t return. Jason will reiterate that Sam is better now. He’ll promise that everything’s going to settle down, but Sam will continue to fret.

Other GH spoilers say Anna (Finola Hughes) will ask Finn (Michael Easton) for assistance. She’ll explain the diamond situation and hope that Finn agrees to help. She desperately needs a meeting with Raymond Berlin (Robert Curtis Brown). It appears Finn may be the only one who can make it happen.

Finn will also encounter a harsh reminder of runaway Hayden (Rebecca Budig) on Thursday. Lucy (Lynn Herring) will wonder what Finn wants her to do about the house. Finn hoped to build a life there with Hayden and the baby. The idea of letting all that go should be brutal.

Julian will think he can come across as honest and sensitive, but Scott won’t agree. He’ll think the prosecution will twist Julian’s words and make him look like a scheming liar. They’ll go to war over this, but it’ll be Julian’s call in the end. Julian will probably take the stand, but it won’t be enough to save him from a prison sentence.

At Crimson, Valentin (James Patrick Stuart) will show up with a smile on his face. He’s arranged something special for Nina (Michelle Stafford) and she’s sure to be pleased. It seems Valentin’s surprise is a visit with Charlotte (Scarlett Fernandez). Nina loves that little girl with all her heart, so this will definitely brighten her day.

Charlotte will help Nina see just how much she wants to put her family back together. Valentin and Nina’s reunion is brewing, but more Anna drama could be coming up. We’ll give you updates as other GH news emerges. Stay tuned to the ABC soap and don’t forget to check CDL often for the latest General Hospital spoilers, updates and news.