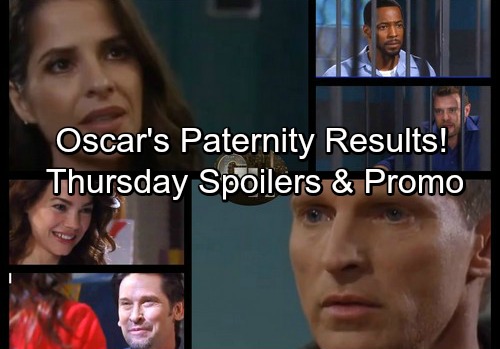 General Hospital (GH) spoilers for Thursday, December 7, tease that Sam (Kelly Monaco) will turn to Jason (Steve Burton) for help. Alexis (Nancy Lee Grahn) hopes to get Drew (Billy Miller) off the hook for desertion, but she’s going to need more than just Andre’s (Anthony Montgomery) word. The navy is on a mission to make Drew pay. They can’t accept something they view as just a theory.

Sam will ask Jason to speak up for Drew. If he shows his face and tells his tale, it could sway the judge. Jason will undoubtedly be willing to assist his brother, especially since he knows how much this means to Sam. In lockup, Drew will blast Andre for taking away his life. He’ll rage over the predicament he’s facing now, but maybe Andre and Jason can at least clear his name.

Across town, Franco (Roger Howarth) will plan a sweet surprise for Liz (Rebecca Herbst). She recently blurted out a proposal and they decided to get married. However, Franco would like to do things the old-fashioned way as well.

“Friz” fans certainly won’t complain about another offer of marriage. Bring on the romance! Franco will get down on one knee and ask Liz if she’ll be his wife. Naturally, Liz will accept and they’ll get ready for this exciting new chapter.

Of course, Franco’s secret will linger in the back of his mind. He kept everyone in the dark about the twins and repeatedly lied to Liz. That should come back to bite him eventually. Meanwhile, Lulu (Emme Rylan) and Maxie (Kirsten Storms) will bust Nelle (Chloe Lanier) in front of Michael (Chad Duell). He’ll be confused about their search for answers, but they’ll quickly explain the trouble.

Lulu will insist that Nelle’s the one who leaked the details of Nathan (Ryan Paevey) and Amy’s (Risa Dorken) scheme. Once Nelle’s backed into a corner, she’ll admit that she did it. Nelle may add that she’s not even sorry. She feels like Maxie had it coming and the public was being deceived anyway.

General Hospital spoilers say Michael will rip into Nelle for scheming again. He’ll try to wash his hands of her, but she’ll contend that he can’t walk away now. Based on all the baby anvils that keep dropping, it’s pretty much guaranteed that Nelle will announce her pregnancy.

Elsewhere, Josslyn (Eden McCoy) will receive the info she’s been waiting for. The paternity test results will come in, but we’ll see if GH reveals them now or saves them for Friday. Regardless, Oscar (Garren Stitt) will find himself on the hot seat. Sonny (Maurice Benard) will grill Oscar about why he took off with Josslyn on Thanksgiving night.

Oscar will have to think fast and come up with an explanation. It sounds like some tense moments are ahead. We’ll give you updates as other General Hospital news comes in. Stick with ABC’s GH and don’t forget to check CDL often for the latest General Hospital spoilers, updates and news.