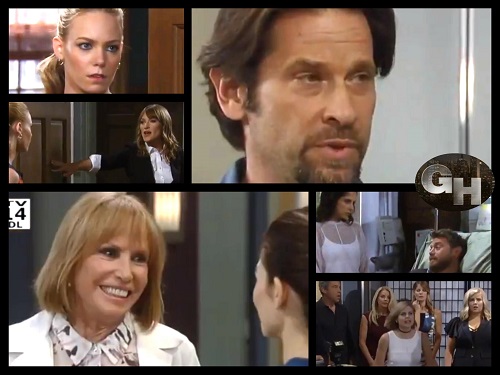 General Hospital (GH) spoilers for Thursday, September 28, tease that Maxie (Kirsten Storms) will step up to calm the Ask Man Landers chaos. Nathan (Ryan Paevey) just blurted out the truth after being confronted with cheating allegations. Since Spinelli (Bradford Anderson) is still pretty confused, Maxie will do her best to explain.

Spinelli will be sorry his accusations led to Nathan’s exposure, but what’s done is done. Now Nathan will have to face the potential consequences. He’ll try to protect Amy’s deal, but Quinn (Jennifer Bassey) may not be happy as the details come out. It could take some work to get her back on Amy’s side.

Mac (John J. York) and Felicia (Kristina Wagner) will be stunned when they discover Nathan has been involved all along. General Hospital spoilers say they may be even more embarrassed by their little romp in the park! Nevertheless, Nathan should be relieved on some level. He’s been under a lot of stress thanks to this tricky ruse.

Meanwhile, Nelle (Chloe Lanier) will face some stress as well. Sharon Grant just showed up at her door and she’ll refuse to let Nelle get away with her actions. She won’t want Nelle’s next beau to end up like Zack.

Nelle will insist that she did nothing wrong then and she’s doing nothing wrong now. She’ll assure Sharon that she only has love on her mind. Elsewhere, Carly (Laura Wright) will have concerns about Michael’s (Chad Duell) decision to skip Bobbie’s (Jacklyn Zeman) party. She’ll feel like Sharon is right about Nelle tightening her grip.

Of course, Michael will point out that this is entirely his choice. Nelle even pushed Michael to attend without her. General Hospital spoilers state that Michael will get fed up with all his mom’s meddling. He’ll shout that Carly should back off and let him live his own life.

Across town, Franco (Roger Howarth) will figure out who the anonymous buyer was. Someone purchased his favorite painting, but perhaps he’s about to get it back. Since Liz (Rebecca Herbst) will have to offer an explanation on Friday, maybe she made it her mission to retrieve this beloved piece of art.

Other GH spoilers say Monica (Leslie Charleson) has some good luck headed her way. She’ll talk to Liz about how things seem to be turning around. Sam (Kelly Monaco) will provide some positive updates, so Monica will definitely be on cloud nine.

At Jason’s (Billy Miller) facility, he’ll tell Sonny (Maurice Benard) that he can’t take risks anymore. He’ll hope that Sonny can accept that. Sonny will just be glad that Jason pulled through the crisis. Steve Burton’s character will head to Port Charles soon, so Sonny has options!

GH fans won’t want to miss all the drama. We’ll keep you posted as other news comes in. Stay tuned to the ABC soap and don’t forget to check CDL often for the latest General Hospital spoilers, updates and news.