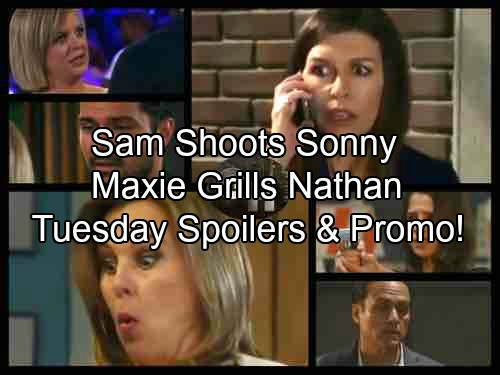 General Hospital (GH) spoilers for Tuesday, July 25, tease that Sam (Kelly Monaco) will make a shocking move. She just confronted Sonny (Maurice Benard) at the construction site and he can tell that she’s really gone off the rails. Sonny will do his best to settle Sam down, but her rage will remain. She’ll insist that she has to be the one to take Sonny out.

GH spoilers say Sam will eventually fire a shot. Once Sonny is wounded, Sam will push him into a pit and leave him to die. She’ll feel satisfied initially, but it won’t be long until her alarming visions return. Sam has toxoplasmosis encephalitis and it’s wreaking havoc on her mind. Finn (Michael Easton) and Griffin (Matt Cohen) will get to the bottom of it later this week, but they’ll fear they might be too late.

Meanwhile, Valentin (James Patrick Stuart) will give Nina (Michelle Stafford) updates on his difficult ordeal. Jason (Billy Miller) tortured him for answers that he didn’t have. Valentin didn’t take Spencer (Nicholas Bechtel), but he faced consequences for it anyway.

Nina will argue that Valentin needs to give a statement to the police. She won’t think Jason should get away with his brutal actions. Valentin will cave in, but some unexpected developments in the case will become Dante’s (Dominic Zamprogna) priority.

At the station, Dante will have to break some bad news to Laura (Genia Francis). General Hospital spoilers state that he’ll let her see his latest discovery. Dante spotted Spencer’s crushed glasses, but the boy was nowhere to be found. Laura will refuse to believe that Spencer could be gone forever. She can’t bear the thought of never seeing her grandson again.

Fortunately, Laura will get a comforting surprise soon. Spencer has escaped and he’ll make his way back into his grandmother’s arms. General Hospital spoilers say Spencer will reluctantly confirm that Valentin wasn’t his kidnapper. However, he has no intention of giving up his quest for vengeance.

Across town, Carly (Laura Wright) will have a chat with Jason. They’ll talk about Sonny’s plan to get out of the mob and all the trouble it will bring. They don’t realize that Sam is Sonny’s biggest threat right now!

Elsewhere, Anna (Finola Hughes) will get a joyous phone call. She’ll learn Robin (Kimberly McCullough) is in labor, so she’ll catch a flight immediately. This will set up Finola Hughes’ vacation from GH, but she’ll be back down the road.

In the meantime, another phone call will cause problems. Nathan (Ryan Paevey) contacted Amy (Risa Dorken) just before Maxie (Kristen Storms) walked in. When Nathan admits he wasn’t on the phone with anyone at work, Maxie will wonder who he was talking to.

Nathan will have to tell a few fibs to wiggle out of this one. We’ll keep you posted as other GH details emerge. Stay tuned to the ABC soap and don’t forget to check CDL often for the latest General Hospital spoilers, updates and news.